…what’s that Imperial marching band sound I hear in the distance?

…oh, no! Please don’t tell me it’s the ruddy Austrians again, with that jumped up leader, Radetzky, taking over the city?

I get the feeling we are going to need a tiny little rebel uprising, if I am not greatly mistaken…

‘Smoke rises from the barricades, messengers dart among the rebel’s outposts, the air is thick and vibrant with expectations…
Radetzky: Milano 1848 is a cooperative game in which players act as the people of Milano rising against the Austrian Empire, represented by Austrain soldiers and their leader, Field Marshal Joseph Radetzky.’ (description from the publisher) 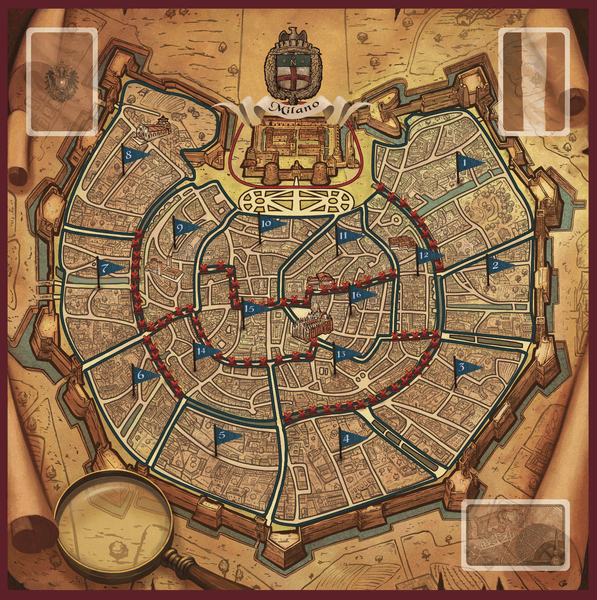 This is a pretty brand-spanking new cooperative title I bought from this year’s Essen Game Fair based mostly on how it looked but also partly on having watched a number players play a demo game at the Post Scriptum/Demoela exhibitor’s stand… which left me  wondering to myself how this might be as a solo experience. A huge gamble, I know, using my own money for a game I hadn’t researched extensively before hand, which is my norm… but as I did get it offered at a slight discount, and only because I got a good feeling about the game, I went and parted with a small wad of Euros. Most uncharacteristic of me so I was expecting big things…but would this game deliver? Would this language free (except rule book) area control, card driven action game live up to my expectations, or would I sourly regret parting with my cash (not to mention the enormity of the task simply getting my wallet to open)?

So dear soloist, let us see how events are to unfold in Milano during the 1848 Austrian occupancy!… was it really worth me parting with hard cash?

I so often find this the hardest element of any review to convey to other gamers, particularly as much of the influencing factors result in a very subjective opinion. In this instance the game components are pleasantly illustrated with imagery that does lend to a slight historical feel and the topic is certainly an interesting once to explore in game form. However, looks don’t make for deeply immersive feel alone, and I am not sure the mechanics… the way the game plays thrust us at the forefront of this turbulent period from a true realism point of view.

In contradiction to my self, I do, however, feel this is an immersive game.

How so? you cry in unison… which is apt for a solo audience. Let me expand on this… the immersive nature, not the solo calling out in unison. We do have a strong theme… the point to our  game-play. We also have mechanics that emulate conflict, movement and area control which don’t necessarily make us feel we are deeply ensconced in Milan as, perhaps a miniature skirmish or hex-and-chit war-game might, but they do manage to all pull together, giving us a game-play/experience that is ‘all engaging’, ‘all consuming’ and on this basis, I proclaim that it does immerse us in a slightly abstracted, but deeply rewarding game.

There is a distinct focus on area control here, working with a rudimentary hand-management of multiple use Action cards that drive the bulk of the game.

It is the whole feel of the game that make this an interesting little chap. The individual mechanics, details of which I shall not bore you with, combine to make for a rather compelling game. The method of combat/conflict of territory makes an interesting adaption of the rock/paper/scissors process, but it is the multiple use cards that are most noticeable, and of most interest in a game. 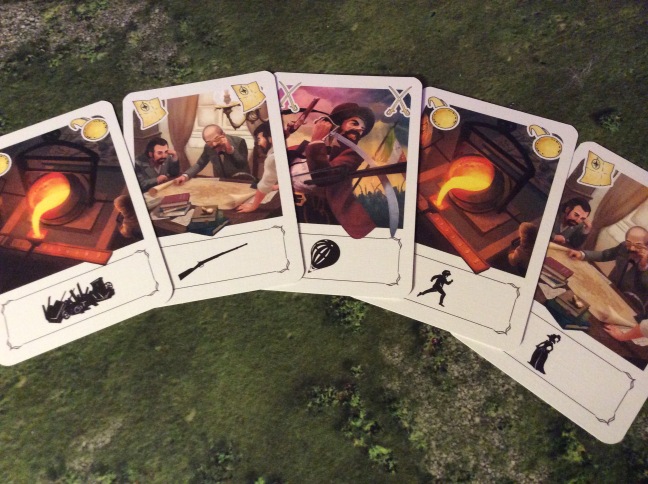 These multi-use cards offer us the opportunity to engage the Austrians in deadly close combat using the aforementioned rock/paper/scissors method, but also allow us to draw upon special action abilities (such as drawing additional cards, using exotic young ladies to draw Austrian troops from their posts and take to the air in hot air balloons to avoid walled/barricaded areas…this is not strictly accurate from a historical perspective as the balloons were used for communication rather than human logistics, but artistic licence does make for a deeper strategy and more player choice)

Ha… I neglected to mention that cards can be discarded, for want of a better phrase, over a number of turns, in an attempt to upgrade the special abilities they have. The discarded cards regrettably have no further use other than facilitating an upgrade, but subsequent cards played get to benefit/reap the rewards. The above example shows that the discarded set of ‘rock’ cards has upgraded the combat action. now, when combat takes place, we can draw three rather than two Austrian cards from which to choose one to oppose. This is one of the numerous understated ways we can plot, plan and negate any of the ‘dreaded’ luck elements within the game.

Despite all this waffling on about cards, we, the Italian freedom fighters, have an uphill task occupying regions of the city as the movement of Radetzky around Milan does not automatically reveal location cards for us to occupy. Instead, a rather cunning tracker has been included (adjustable for player count) to monitor the number of opposition troops that have been eliminated from the game. As this tracker reaches its end,  previously revealed location cards become available for us to occupy, and the tracker resets to its start position. I found this a rather nice touch as we are forced to confront the enemy in order to advance our territory control…which in turn means we have to push our luck during each conflict. We must plan and position our forces to optimum effect or see Milan flood with the weight of Austrian forces.

The board and standee are well finished sturdy affairs and with the numerous wooden tokens, culminate in an aesthetic pleasure to behold. the illustrations and graphic layout are such that a cohesion is maintained through out the components whilst offering ease of icon understanding/identification. 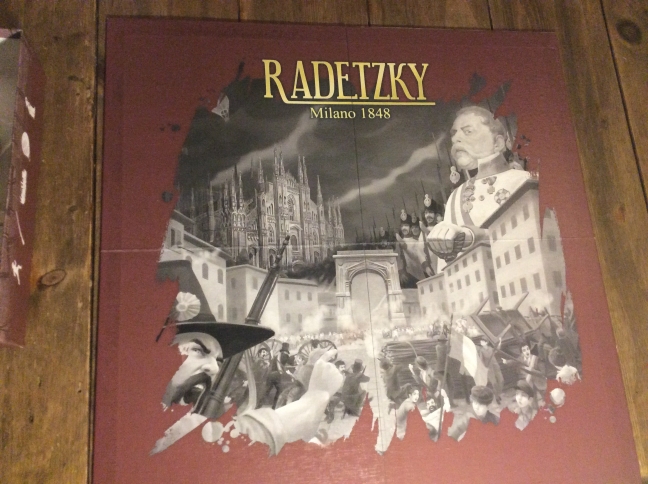 A rather nice touch is the full board illustration applied to the reverse of the game-board. of no consequence to game-play but something to boost the quality feel of the game. The whole presentation is of a highly professional nature.

This is first and foremost a cooperative game where multiple players take on the game its self (The occupying forces of Austria). Being cooperative, obviously opens this up for a soloists such as ourselves to take on the oppressors single handed. The designers have actually put a little more thought into the game for solo play than merely letting us loose with the cooperative game. We operate three Italian pawns and draw a hand of cards for each pawn activated… and in this way we have three turns to perform actions based upon the hand of cards we hold. Planning works just as it would for multiplayer only those tricky discussions are held within our own mind (our out loud when Me, Myself and I get into heated discussions). Turn order is obviously taken out as we are the sole operator, but it can, in some circumstances allow us better manipulation of circumstances as we choose which pawn to operate and when.

Support is a particularly useful feature during solo play. If two pawns find themselves at the same location, a set of three additional cards may be drawn to assist (these can only be used for combat, not for their actions) which helps us take on the leader, Radetzky, himself.

There are no complex dashboards or multiple statistics to monitor as a solo player taking on multiple roles might be expected to do, which means we can focus more on strategy, logistics, pawn movement and tactical elimination of enemy units, along with planning the best use of our card’s abilities. This all makes for a particularly entertaining and challenging puzzle-like solo experience.

I believe comments made through out the numerous sections above make this section almost redundant. It is safe to say both me and myself thoroughly enjoyed the game…

and I regularly feel compelled to get it out and try once more to best this Austrian fella. It can be perplexing, there can be a tendency to rush and all the while the forces of the AI grow ever stronger. This really is a difficult challenge of a puzzle to solve, but equally entertaining and engaging. I found play to be quick and easy to oversee, but all the while these simple mechanics lend themselves to a bugger of a foe to beat.

Surprisingly, I have found this title rather addictive and, admittedly, I have yet to vanquish the Austrians (although I did come very close a couple of times) I feel compelled to take to arms again and again. This brutal Field Marshal Joseph Radetzky chap is hell-bent on denying Italian access to the BSoMT 1d8 die, but the perseverance of the Italian uprising find a way to occupy enough space in Milano to achieve a rebellious (7).

This is not a complex strategy game, but tests us to the extreme when trying to fend off an aggressor. This is definitely a great title worthy of the attention of soloists that wish a lighter game-play that still packs a punch in the puzzle solving department.

Now if you’ll excuse me I have to get this bloody barricade finished… although I have my doubts about cardboard bedsteads and leather Trilbys will hinder the Austrian soldiers. However, Mrs Lemingtonspa has offered to raise her skirts and flash a shapely ankle to distract troops from their guard duties… this may allow us time to blow up a number of party balloons, which we should be able to float up and over the boarder patrols…