#16cs… of Bloodcurdling Screams and Horrifying dreams (The Scare Factory)

OK! that’s the last of the bloodied, severed fingers boxed up and the night terrors bottled and corked… just print out the packing lables and…oh… those bloody humans have got in again… wandering all over, contaminating the factory. I’ve a good mind to set a few traps to scare the pants of them… It’s worse than cockroaches…at least they area useful for a mini-scare. Humans are just an irritation.

“Players will take the role of different monsters that find their home within the Scare Factory; a mysterious and magical place deep within the earth that produces the many Scary objects and entities that monsters desire to have in their everyday lives. The monster’s lives are interrupted, however, by humans who have been digging deeper into the earth. They discover the Scare Factory, and decide that they will take it for themselves. They will use it for their own profit, and strip away everything that makes the Factory unique. In order to avoid losing their way of life, the monsters will have to fight back.”

The Fear Factory has a novel theme. We, the live player, the hero in reality play some form of evil monster running a factory producing items of fear for discerning customers. The game runs the bad guys.. the humans, which is a nice twist. We have to defend our livelihood against an infiltration of said prying humans. Humans determined to steal our secrets. In essence it is a tower defense style of game, but the gameplay actually suits the theme well…. and an aspect I particularly like, not seen in many (if any) other similar games is the lack of blood, gore and mutilation. We merely scare the enemy away and even when they attack us, we lose action cards (like losing ability) but don’t actually incur wounds. We do the same to the Boss, forcing them to discard actions and when action less, we win. The theme is somewhat comic horror, but with the lack of death and wounding, I like that it can be far more accessible to younger players.. .or older players who do not have a penchant for brutality. As such, I think the gameplay and imagery create a most involving game experience.

As a tower defense game, the enemy is operated by the smooth running dice and card mechanics, governing all the AI movement and deployment… our human enemies. This allows for an unencumbered gaming experience, but I shall touch upon the Bot later operations later.

Our game objective is to prevent the Boss human reaching our vault of secrets whilst we disperse its entourage of annoying humans. We have an arsenal of “scare tokens” and “ward tokens” at our disposal to leave scattered around the factory. Careful planning can result in tokens being triggered by the humans as the wander through our factory. Triggered tokens form two roles. They slow the enemy down or force them to move. If we are particularly cunning, we can create a situation where a token forces humans to move onto a second or third token causing a chain reaction of unprecedented scare mongering. This multiple triggering scares the sh… frightens the humans a lot and inspires them to run away, leaving the board and, in effect, the factory, in one screaming motion. Triggered tokens are also instrumental in depleting the Boss human’s action cards (effectively its health) reducing the number means it can cause less havoc to us in later phases of the game, and removal of all cards gives us the win. There are a lot of subtle special abilities and card actions that we, as the live player, must become familiar with to enable us to successfully defend our factory. I have linked a playthrough video below, that clearly demonstrates the mechanics at work

As the prototypes were all out, I took on the tabletop simulator version but I would suggest looking at the Kickstarter page to get a true idea of what to expect. The artwork looks great though, and digital renderings of the miniatures look excellent

As a fully cooperative game, this can be played solo either with a single monster or with two or more. As gameplay is particularly geared to puzzle solving; where to move our characters, where to most effectively leave scare tokens and the like, how to best scare off these infernal humans, it fits right in to a solo players remit. The humans are nicely controlled by dice and cards, which takes much of the pressure off the live player, as book keeping is kept to a minimum. There is a fair amount of randomness regarding the human movement, but this merely keeps us on our toes as second guessing their next move suddenly becomes a far less predictable affair. We do sometimes catch a break and have a fortuitous die roll that gives us some control over our foe’s movement, and as such, carefully laid traps can be triggered … in fact chains of traps can be triggered and off speed our enemy, scared to the seat of their britches

Drawing from a deck of cards provides us with the type and quantity of newly arrived humans, spilling onto the factory floor, ready to be located on their “spawn tile”. A simple mechanism but effective, and it soon becomes a particularly crowded factory if we are not vigilant. Movement is equally simple. Each type of human has its own specific custom die which has a range of coloured faces relating to the factory tiles, and several special faces. Movement is in its simplest form a matter of matching a human dice roll to a door at their location. If an available door is available, the humans move through it onto the adjacent tile… if they are out of luck and the door is in effect unavailable (locked, a secret door or a wall) they remain in place. The aimless movement of the humans is more akin to curious onlookers with no real focus or direction, taking a mystery tour around the factory, inadvertently triggering scare tokens and, if we are lucky, get so scared that they leg it quick sharpish out of the factory. The pesky humans can attack us if we are foolish enough to hang about without leaving scare tokens to trap them. The attack die doesn’t do us physical harm as such, but forces us to move and can remove one or more of our three action cards. Loss of all three cards result in the monster being removed, but as it can return, I look at it as a temporary setback, rather than “attack and damage” as we get opportunity to rejoin the game later.

The Boss is handled slightly differently. It has the soul purpose of making its way to our vault… and if it does, its game over. The secrets of the factory are the humans. The boss has a large number of action cards like our monsters, but are initially face down acting as a health marker (successful use of scare tokens allow us to remove these cards during the appropriate phase of the game). Once the boss enters the game, having moved its way around the “boss round tracker”, its cards become revealed as play progresses, and these actions are applied… pretty much exclusively most inconvenient to our monsters. However, removal of all Boss action cards will indeed result in a victory for… and our factory can return to normal production.

Initially I thought that this title would prove to be a little simplistic. Lay a few tokens, scare a few humans… a less than challenging tower defense style game. However, once under way, I was more than pleasantly surprised to discover this actually poses a real challenge. There are many choices to make from a strategy point of view… monster movement, deployment of tokens and careful manipulation of enemy movement. We can quickly become overrun but careful planning can reward us with some sneaky chain scares, putting the fear of… well, the fear of something unpleasant into the humans, and ultimately the pleasure of hearing them run into the darkened distance, their screams of fear echoing in the empty corridors. It proved to be a much more involved gaming experience than me and myself though… and I thoroughly enjoyed it. Not a complex game, no bogging down of contrived rules, just a simple, yet enjoyable solo game. 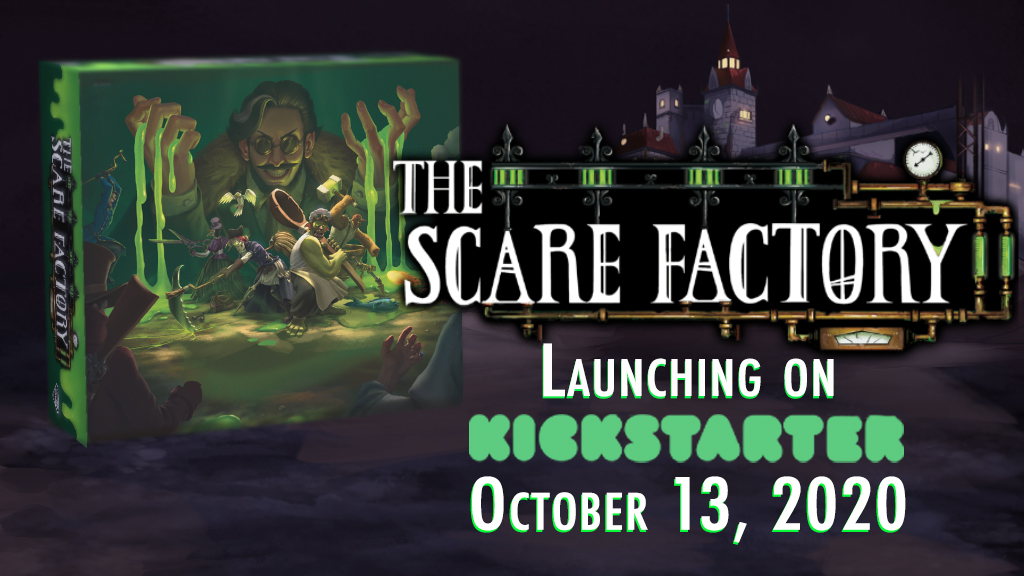 I would recommend this to coop and solo gamers alike. It is light but definitely engaging and at times very challenging so should suit gamers of all levels of experience or ability. The fear factory whips up the BSoMT 1d8 die into a scare frenzied, knee trembling (7)

Right… now I must shoot off. I’ve a consignment of wobbling buttock coughs to add to a vat of screaming knee tremblers. Very popular with the more sophisticated monster…