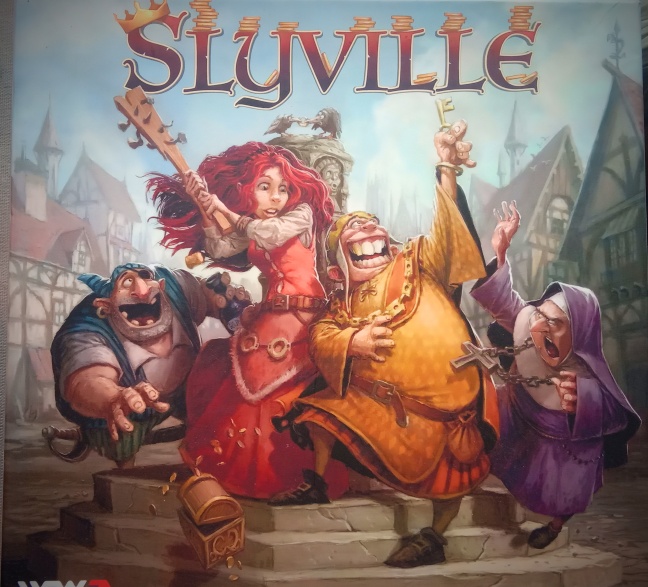 Ohhh my goodness, Lethargy, you useless henchman… I asked you to go and find me a really Big  Deal and what did you bring me back?

A wheel. A bloody great big wheel! Now what am I going to do with just one huge wheel?

Just get back out there and make sure those Red Ruffians don’t get the better of you again…I’ll never live down the day they conned you out of all my gold for a shiny magic bean…like you were in some silly fairy tale. It must have been… a bipedal bean because when I planted it, after several weeks it had grown two feet…. 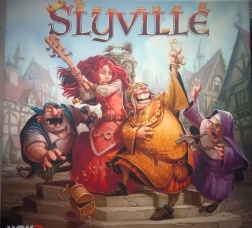 And to be fair, it is not the normal sort of game I would look at, as Slyville is a game of backstabbery and take-that-ness to extreme proportions, and I tend to stay clear of most ‘take-that’ style of games. However, this multi player game of Medieval commerce has made it to the table and has been played, no less… but is it a worthy multi-player guest spot on the BSoMT website?

Let us read on and find out.

(Press play for a medieval ambiance to accompany your read)

The cartoonesque style of visuals throughout the game provides us with a humorous yet subtle visual to this fantasy world. It is believable and dos help create an idea of the population inhabiting this world. But we cannot rely on fancy visuals alone to submerge us into the complexities of a Medieval world. Fortunately the way the game plays, the way it allows interaction, certainly does help plunge us wallet first into this bustling city of commerce.

The way the game is constructed along with the tasks we need to complete to make ourselves successfully wealthy are, although lacking the complexities of a super heavy Euro-game, really simple and as such, effectively allow us to dip a tentative toe into this genre of game, without being bogged down with a multitude of overly complex rules. We very quickly find ourselves vying for commodities and seek, at all cost, that special Deal to ‘rake in’ the old shiny shiny…or in real terms, Influence Points from the Deal Tiles that are acquired during play…in effect, victory points. I was definitely drawn into the ins and outs of not just my henchmen’s activities, but also the city district resources and, more importantly, where my competitors were. Trying to second guess their underhand tactics actually made me feel like I was at the cutting edge of Medieval commerce.

The bulk of the game revolves around a card driven action/hand management system where we select a series of order cards that we “issue” to our henchmen. We play them at various locations about the city and once all players have played their orders, a resolution takes place. The actions have a hierarchy of play order and are resolved in said order. Things like Sabotage that can foil our opponents’ plans, Acquisition that allows us to acquire valuable resources that can later enable us to obtain the highly sought after Deals… which themselves equate to the points we need for victory. And so on. The actions and the order they are played in has a feel of Citadels about it, but there are no similarities or comparisons other than how the cards order is resolved, and I feel is a good solution to the problem. 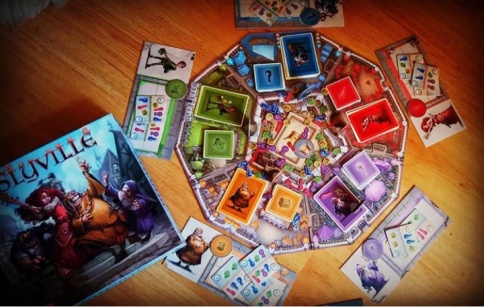 A nice concept for my mind is that we have to play an action player by player and repeat until all players have placed their allotted number of action cards. Nothing fancy here, I hear you exclaim in mild frustration, but as there is no restriction to the zone action cards are played, nor is there a limit on duplicate actions in a location. So we can study our opponents in detail as each card is placed (not unlike a primitive commercial espionage) and adapt or evolve our strategy as the turn unfolds. Additionally, as these actions cards are face down, we are also in a position to bluff our opponents into believing falsely our true strategy. There is an element of take that, as our actions can be interrupted, our henchmen can be moved from their location thus preventing them from acting in the original zone, and the Prince’s Decree cards can holistically mess with all players. As all players have the same action card sets, we know what is available to our opponents and helps us second guess their cunning bluffs.

Light strategy, light take-that, but heavy on the entertainment, for sure, as we race to achieve 100 victory points from our business Deals (Big Deals require more resources and are big scorers, whilst Small Deals require fewer resource as payment but yield a lower victory point. This offers us even more scope for strategy) What is nice with the end game scoring I that the first player to hit or pass 100 triggers an end of game situation giving all other players opportunity to complete a final turn. In this way, first to the post does not necessarily mean a victory can be assured. Tactical players may have held back for a final push in the last few moments, sneaking their devious way to victory.

I have only a prototype copy of the game but the finish of art and cardboard components id very good. If the production copy is as good or better, we will be in for a treat once the game is published.

In its current form, the game is for three to five players, so not suitable for the soloists among us. That said, the game complexities are not huge so some bright spark somewhere will undoubtedly devise a cunning AI to offer between two and four opponents for us solo players to enjoy the game when friends and family are nowhere to be seen 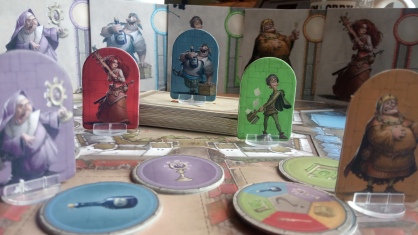 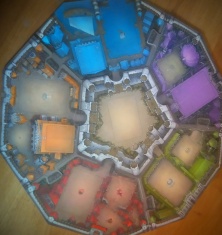 At present this title comes as a 3-5 player format only and no immediate plans are on the horizon to facilitate solo play, that I’m aware of, but I suspect once on the market, the game play/mechanics lends themselves to fan-made solo suggestions. We shall see.

I think the fact that this is both tongue in cheek and very light, make it particularly entertaining for me. Now, saying it is light does not mean it is without substance, structure or challenge… I merely refer to the ease of gaming. We are not completely bogged down with rules and as commerce, economy and resources are calling for our management, ease of said orchestration makes the gameplay, interaction and outright backstabbing so much more enjoyable. Now it must be noted that I do not favor backstabbing in games for the most part as it can invariably lead to ganging up on individuals, resulting in illumination or putting a player in an unwinnable position. Slyville has scope for all players to come a cropper, fall foul of their rivals but with such variation in Prince’s Decree cards altering zone effects, the Prices favor moving from player to player and a wide choice of actions and deployment of action cards, being able to gang up on a single player would be much more difficult to actively implement. It is light and often strategies can quickly come unstuck, but there is scope for those of us who like to plan ahead, but moreover, the game is suited to those of us who are able to adapt and think on our feet…

For a 45 minute to an hour’s gaming, this title does offer a lot of fun, especially for families, although the more hard core gamer would not feel out of place playing either…unless one is adamant that only the heaviest of heavy Euros are the only true form of punishment… 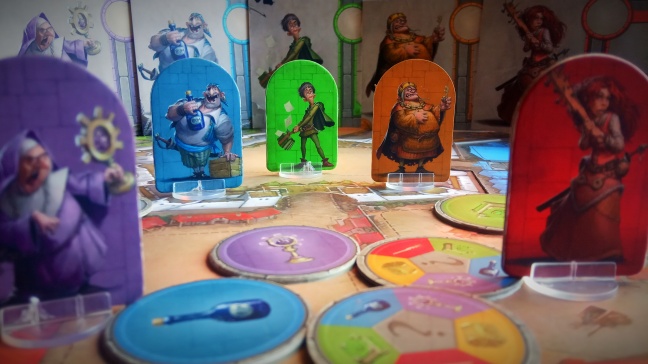 I think that because there is so much variation in available Deals to be made (including each one having small & large side options), that we are able to quickly adapt to changing circumstances and mold our strategies to fit. Strong front runners do not materialize…or at least in the level of gaming I experienced testing out the game, no run away leaders occurred. And let’s face it, the moment this happens, all and sundry wish to see their demise, and so Slyville brings a natural order to play.

Oddly enough, I really enjoyed this game. Much more than I imagined I would. I think because of the lighter gameplay, speed of game start and lighthearted Slyness…so in the city center I rolled the BSoMT 1D8 die for a sneaky little (7). There will be a link below to find out more about the game and its availability.

Where is that incompetent buffoon? Some days it is just better to go and strike those deals one’s self and not rely on henchmen at all…into the hustle and bustle of the thriving city and me only n my Tuesday slippers, for goodness sake