Laaaaaaaaaaaannnnnnd hoooooooo! I cry in my best and most enunciated nautical accent…

…then with an almighty jolt I find myself thrown unceremoniously from the idyllic comfort of the crows nest, only to find myself nostrils first in the accursed dusty soils of the new world. A note to self… shout warning of land much earlier next time…

Right! Seeing as I am here, I may as well indulge in a spot of exploring… and, if all goes well, I might even decide to settle here. Assuming, that is, I can fund a nice sunny spot to build a city (one has to think big you know!)

Laaaaaaaaand Hooooooo! ….wait, I think I have used this gag before with some nautical referenced game review… (above in fact) but there is or are many land/s ahoy in this game. The same many land/s. I feel I am getting simultaneous triple vision. This could make life most unusual… which do I choose?… covering one eye doesn’t appear to help make that choice any easier…

…I really should have paid attention in the quantum world theory module at my early history exploration classes. But never mind. I have a ship load of ungainly colonists to ship to the new world and discover new lands…

This is the first of the Ragnar Brothers Quantum world games, but not the first I played. For me this is a discovery of reverse order, if you like.

The Principle in all the Quantum World games revolves around the concept of multiple parallel worlds offering a wealth of variety and choice. What may have gone well in one world may prove to be a catastrophic disaster in another, like discovering a touch too late that one’s underwear is actually a size too small and on back to front, which inevitably rides up in places underwear ought not ever to venture. I digress somewhat here, but the idea, the driving principle, is that play can simultaneously unveil itself in any or all of the worlds present. So here, we are able to set sail on oceans blue in search of wealth, raw materials and a damned good session of colonisation in the New world, just as we enter into the footsteps of the original Portuguese explorers… only with more worlds for us to choose from than they had access to. This adds to the variability and richness of player decision making during the game, which is all fine and dandy for those multi-player exploring types, but what about the lowly soloist? How do we fair in this multiple world affair?

I suppose I must point out, nay warn you that this is likely to be a rather overly biased review…. yes, I was very kindly given the copy by Phil or Gary (I forget who, now). but this minor point has no bearing at all… it is because I am such a huge fan of all things Ragnar. I have a rapidly growing collection, and as with the other Quantum games, the Ragnar Brothers have hit some kind of formula that really appeals to me. So! You have been warned!

So without any further a-do, we will do one!

I always have great difficulty formulating any thoughts.

…No, no not at all. Thoughts come a plenty but I refer more specifically to the point under discussion. Formulating an opinion on submersion is so tricky.

If we simply mean does it look like we are going to the New World to prosper in some static worker placement affair, then, sadly this is a complete failure. The game looks pleasant and has illustrations, text and graphics that lend a suggestion to the theme, but the gameplay….the tri-world option and the manner with which we allocate our little wooden chappies to to our bidding breath some magical form of  vibrant energy into the genre. So, from this point onward I would strongly argue that we become thoroughly engrossed, deeply immersed in the gameplay. 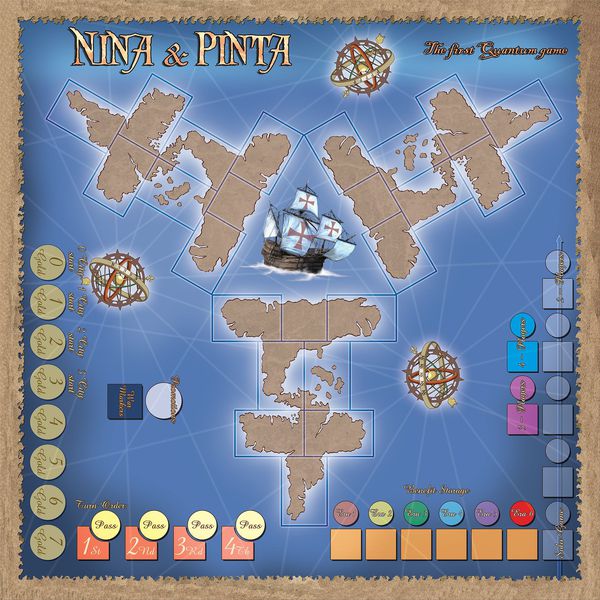 It has a good theme but this notion of quantum worlds adds a whole new engaging element to a worker placement game. It is the way the game throws us curved balls and equally offers us so many tempting options, that we become completely immerse in this tri-world occupation. One dimension seemingly completely dissociated from another, can rapidly become inextricably embroiled, and crucial to a well thought out master-plan, that spans dimensions unknown. Yes, this game fully immerses us into a strange and wonderful quantum world theory.

At its heart this game gives us a nice take on the worker placement/resource management game. It does do in a less conventional manner which adds to Its charm. We have to afford to send our workers to place them on the board. We have to physically ship them over oceans to the resource area. This in its self makes a change from simply plonking cubes (or novelty sculpted wood in deluxe versions) on a resource spot. 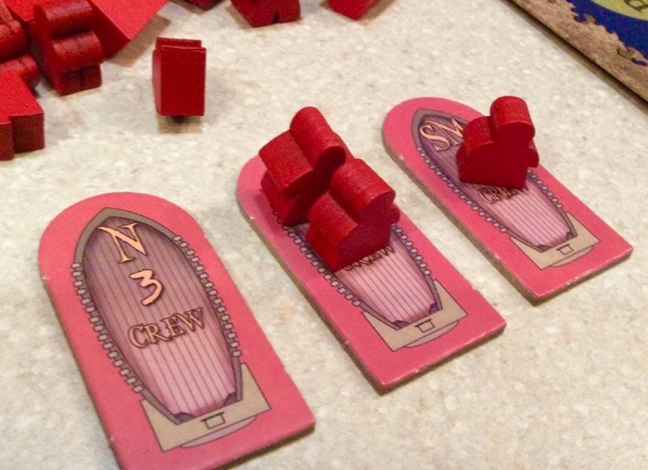 We have to man ships, sail to an appropriate land, off load said meeples and then, if we have sufficient resources, explore the new and strange land. Only then can we claim rewards… and rewards we have no idea about until an explore action is taken (as the land tile’s rewards are hidden on set up). If this didn’t spice up the genre enough, we have the Ragnar Brother’s Quantum world notion. Ninia & Pinta has three such parallel worlds, each offering different rewards/resources at each parallel land. As the game progresses certain locations on one world become intrinsically linked to areas on other worlds so that occupation of a land on one world can simultaneously find itself adjacent to its neighbour lands in all worlds… this can be used for various skills or actions during the game. The revealing of further resources during each round provide us further options when considering a plan of success. With limited actions, acquiring such resources could be quite hindering to an overall strategy, but said resources are often intrinsically embroiled in end game scoring… so we are given some seriously difficult choices.

As with all Ragnar games, there has been attention to detail, Components are very well printed onto very sturdy card…and there really are a large quantity of tokens, meeples, and captain meeples. The illustrations and colour scheme are appropriate to the game yet maintain a certain style present across the Ragnar range. The world segments are not flimsy playing cards. These are, as with the tokens, thick, heavy duty customers and as tiles are frequently flipped during exploration, it makes handling them so much more controlled. There is an overall feel of ‘well-madness’, if ever a word should exist!”

This title has obviously been conceived as a multiplayer game, pitting player against player. For us soloists all is not lost as, with quantum world theory, any eventuality must exist somewhere, and that is most definitely the case for the solo mode. This mode has been developed alongside the primary game, not a mere add on. It has undergone some serious thought as the AI dummy player has distinct moves, a hierarchy of actions, if you like, to make it at best a serious irritation to us, the live player. 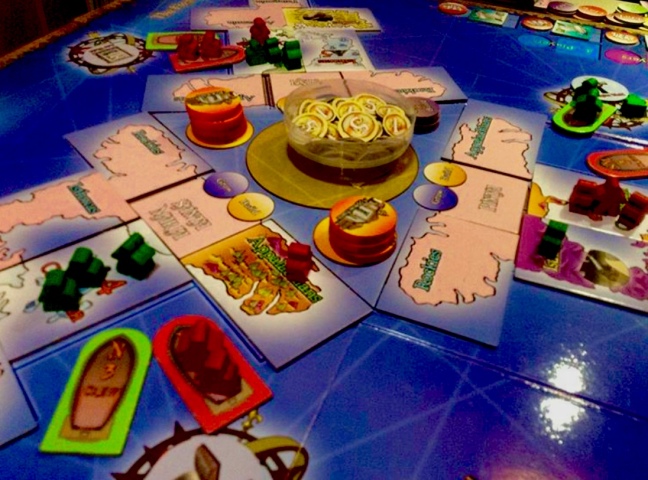 At worse a daemon explorer beating us to the post on every action. Right from the off, we are on the back foot, as it were. We are unable to deploy our exploring type meeples as easily and effectively, meaning we have always plenty of catching up to do. This is made significantly worse by the apparent ease the AI collects its choice of Benefit tiles each round…and the potential for set bonuses. This pressure means that we have to think incredible intensely about each and every mood, to ensure we fully optimise and capitalise on every action we take.

As solo variant, there will need to be a way of controlling the AI opponent. This Bot is really very simple to operate, from a players perspective, demanding little effort with regards to book keeping/upkeep. In the early stages, the AI sails highly staffed ships to pre-determined islands (guided by the placement of the turned over Grow/Build tokens) It has a predetermined hierarchy of actions carried out on each of the three worlds in clockwise order. This overload of strength means that from the off, we are on the proverbial back foot, playing catch-up. It is a nice touch as we are under extreme pressure from the off. If we manage to gain sufficient resources and improve our sailing capacity, we catch the AI, who basically remains at a level strength. It remains a very tense run to the final turn and above the end-score tally, the AI sails to lands effectively blocking/inhibiting the actions we or forcing conflict. This is not an intelligent AI, reacting and influencing the game through complex flowcharts. This is a simple, but rather effective opponent that makes life just that little bit more tricky for us, whilst still dangling before us the golden carrot of hope, the opportunity to win through particularly good strategy… or, as I often find, offering me a pleasant second place out of two.

I have always been a fan of the numerous Ragnar Brother games I have, and this is no exception so huge spoiler, this is a cool game.

I like the components and illustration quality whilst myself really buys into the quantum world nature. Being able to adapt and change strategies by visiting alternate locations often throws up many interesting outcomes. As for me, well, it is the interesting notion that we have to first man ships out to the quantum worlds, paying appropriate cost, them colonising said worlds, exploring for resources and fending off the dastardly AI. Once resources have been acquired, we need to ship them back. Interesting hint of logistic realism. We don’t automatically collect said resources to put them to good use. It is a potential two hour game but at no time during the play do things ever feel to drag. There really is too much to worry about as the AI speeds ahead, building a substantial lead, leaving us in its wake. The game offers us plenty of variability as each country/region of each world has something approximating six or so different versions, each offering different resources or rewards once explored. This means that set up will give us a mad quantity of potential variables…in other words, we are unlikely to see the same combination of lands on each world show up from one game to the next. This helps keep each new play nice and fresh. There are a lot of choices/decisions to make, which differ every time we play, so there is a substantial longevity to the game…always something to be mindful of when splashing out on a new game.

One would be rather foolish to believe any tension I might to employ as I lead up to the Yay or Nay verdict, judging by the comments made above so I shall cut, somewhat unceremoniously, to the chase. This for me is a resounding Yay…it offers some exciting, challenging and engaging gameplay. The devious AI captain sails his fleet around the BSoMT 1d8 die, rolling it within their wake to an exceptional (7)