Oh, I can’t keep up this pretence…

I am no builder…

“Magnate: The First City, the hotly anticipated property-themed, city building game has announced it will finally be launching on November 21st 2019, after more than a year of public demos at tradeshows and conventions across the UK and Europe. According to convention attendee planning tool Tabletop Together Magnate was the most anticipated game by a new publisher at The UK Games Expo (the country’s largest board game show) earlier this year.

A kind of ‘Sim City meets Monopoly’ in thematic terms, the game is already getting glowing reviews for its highly strategic gameplay (“it has the strategic depth to sit among other economic classics like Acquire and Powergrid.”) and gorgeous components, including highly detailed, realistic building models of quality not seen before in city building games.”

Something new on the game scene manifests in the form of a rather extensive property development game. I must admit that the theme, or at least the sound of the theme, did not instantly grip me … although I admit I was intrigued when I first saw the game at Airecon, Harrogate, North Yorkshire, especially when I saw this huge cityscape festooned with all manner of domestic and industrial miniature buildings…and what a collection of support material it had too… I had to take a closer look and was suitably impressed by what James showed me… I was even more delighted when he asked me to take a look at how the game played solo…so! Was the solo all that it was cracked up to be?

Aesthetically it is immediately apparent where we are. The imagery and choice of rendering lends itself to a distinct metropolis…or maybe I should say a gigantic building plot awaiting development into said metropolis. And this is the crux of the game. We are competitive property developers, vying for prime real-estate to build our sprawling industry, retail and domestic accommodation. The scale of the game is vast from purchasing land, construction, attracting potential tenants, to selling property and …well, basically trying to make a huge fortune. I have not played anything similar to this before so have no grounds for comparison but, for my own game plays, I really felt I was at the helm of some behemoth development company, and as such, definitely think this game immerses us into the property market in a huge fashion…

There is a lot going on in this game, with a vast array of choices we can make, constantly adapting our strategy to the market forces and such. But at its heart is a crucial property market tracker. This little chap keeps tabs on actions that all players make and reacts to certain actions they take, which inevitably have a holistic and dramatic effect upon the entire game. From this one point, land/property prices rise and fall (heading for a property crash) as player actions, or inaction, can cause crisis type cards called Risk cards, to be drawn that devastate the resale market. It would be foolish to go into micro cosmic details here about functioning mechanics, but as players, we buy land, build property, advertise and encourage occupants and…obviously sell when the going is good. In essence the game is simple and runs simply once the rules are familiarised. It is the clever the way all aspects of all players actions affect the Property tracker, and consequently have a huge impact on future rounds. It does a very good job emulating aspects of the real world. For me, the most successful mechanics revolve around the AI for solo play, but I shall touch upon this later. 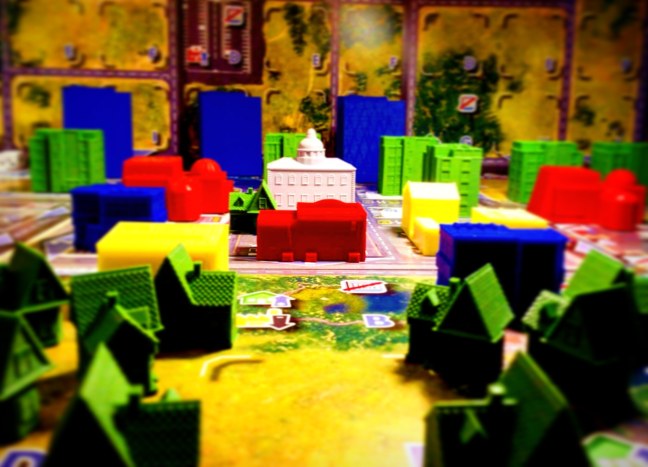 Players have three actions each round and can pretty much do as they please with these actions, within rule boundaries. With a big game like this one would imagine that there would be a lot of down time but as rounds are structured such that each player in turn order takes an action (which should only last a few moments) then repeat until all three actions have been taken by all players…and with the ability to bid for first player at the start of each round, it opens up a whole new avenue of strategy, working out which position would be most beneficial…swooping in early to snag up a plot of land, bide time and react to opponents moves ect. Definitely a nice additional element to play.

Selling land/property or collecting rent are the principal (but not only) methods of gaining capital and a nice touch is an advanced tenant option that uses the reverse side of the current tenant tokens, with more specific styles of tenant, each offering different influences on the game in the form of bonuses and value of potential rent they will pay/can be charged. This doesn’t change the overall game but does add an extra layer to strategy/limitations to available tenants

I was playing with a prototype, but the artwork, miniatures, tokens and all the supporting material (there is a huge amount in the game) had a very good finish even at this stage, and I am sure when the game is published/successfully funds on Kickstarter, the end product will be a spectacular site to behold. I have to say the money also looked pretty good and blew my tiny mind with the sheer numbers involved in property sales and requisition. 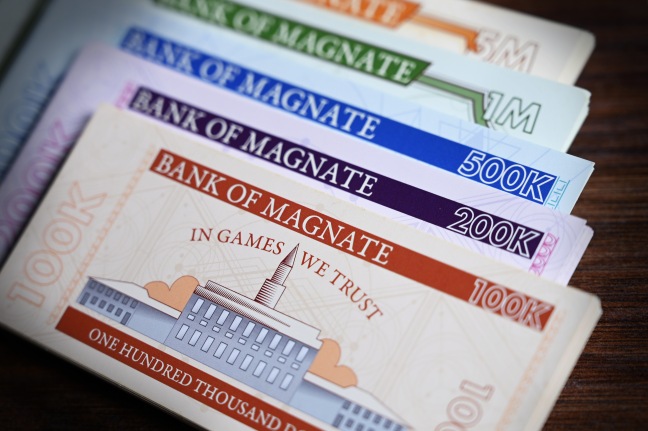 Now we are talking. Who’d ‘ve thunk it? A huge property development game requiring complex strategies could invent an AI that not only functioned as a dummy player, but also posed an effective challenge to the real players. Well James has managed it here. The way the decisions are made using the AI action deck, emulating players actions so well and as it can often become restricted by its current level (it increases in ability and strength as the game progresses), it can make choices we don’t necessarily predict, just like a live player will, when the chips are down…

There is quite a steep learning curve with the first game as a soloist but life soon slips into automatic and running the AI becomes very quick, stress free and with minimal book keeping, allows us to focus on our own plans. By my third game, turns were happening very quickly and I could focus pretty much exclusively on my own strategy… much good it did me, as I had my backside handed to me on a platter several times by the AI.

I was surprised at how clean, effective and, in fact, competitive the AI was for this game. I know there is still some fine tuning regarding challenge ect but as it stands, the AI is a pretty formidable opponent.

The bot created for Magnate is a crafty little bugger…and not just for a solo player. It has been created from an action deck with a built in aggression/ability advancer, that acts in a not dissimilar fashion to a real player…and as such can be dropped into a multiplayer making a two player or three player game have a much more competitive feel. Interestingly even the AI actions affect the property track so there is a real feel of another player on board. There are some decisions the player has to make on behalf of the AI. These are simple though. If it has to build or sell, there is a hierarchy of location choices which are usually obvious, with the exception of buying land. For this element we have to look on the available plots of land for sale and establish which has the most bonus squares in close proximity. The AI rules govern ties and all other choices, so this tiny task is a small sacrifice in my view…and as we are all studying the city scape, we are quite familiar with which plots are most desirable.

I knew the game looked interesting from my first exposure at Airecon, but me, myself and I were really surprised at how well the game played once on my own table. There is a lot to keep an eye on but nothing too overwhelming and so many tricky decisions to make. The AI proved not to be a labour intensive affair, which is always a good thing for the soloist. There was a realistic feel to the game as property and land prices fluctuated frequently as a result of sales and purchases. The crisis deck (for want of a better word) was also one of the factors affected by player action or, even, inaction and adversely effected selling prices as the market heads ever closer to a catastrophic property crash. I have to be honest and admit I had a suspicion the game might prove to be very ‘bitty’ or ‘clunky’ and was unsure how the AI could offer me a challenge. It is always nice to have these doubts laid to rest and Magnate did this in style. I felt it smooth, polished, fast paced and hugely engaging. Something I hadn’t expected from property development. It is good to discover this kind of surprise.

I think that the appeal should reach a huge audience as there is so much to entertain. It is not a analysis-paralysis game. It is fast, heavy on decisions and surprisingly competitive, without overbearing players. This is definitely one to look at when it launches soon on Kickstarter

Some nice touches include a deck of cards that randomly populates the available tenants available each round making for a different game each time… in fact each round, come to think of it.

You don’t need to be a heavy euro, big scale strategy game fan to enjoy this title. It is most suited to those who enjoy a challenging logistics puzzle, as much as anything. Building and accommodating innumerable poor souls in a maze of slums and urban development, Magnate cunningly advertises its dwellings well and rolls a very creditable BSoMT 1d8 die roll of (8)…as much in surprise at how well the game played solo as how good the AI worked

Right! Now I have to go and evict several single parent families, a couple of old age pensioners and a small primary school. After all, the land they occupy is worth a bomb and I have a mind to build a factory or maybe a casino….mwaaaahhhhaaaaaaaaa haaaaaaaa haaaaaaa