I shall go on a solitary hunting  mission for Orc as soon as I’ve sorted the box out. Completely forgot about the end of the last game…oh complete and utter arse! 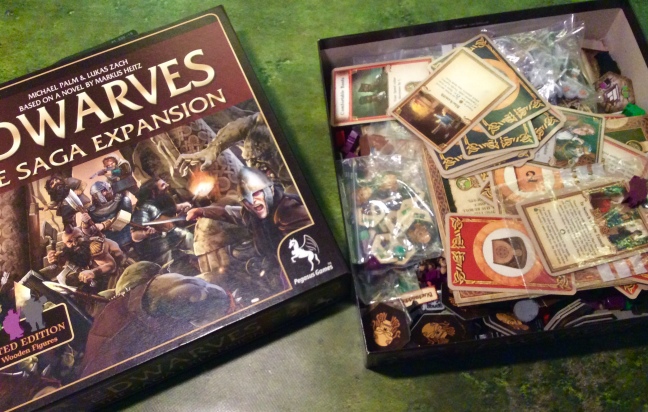 I tried, honestly, I tried my very ‘bestest’! But could I grow a beard worthy of Dwarven song? Could I buggery!…I suppose I could always tape a badger, or even better, a Highland cow to my face…but then the black and white badger option would hint at old age and senility…as for the Highland cow option…hmmm…well that would be a weighty option and are ginger beards shunned in Dwarven society? I’m also alcohol intolerant so risk being shunned from Dwarven society for an inability to quaff beer increases greatly too. I’d substitute alco-free beer at the risk of being discovered but it’s not something that can be quaffed in any great volume.

(Press play for a Dwarven ambience to accompany your read)

What has all this beard like waffle got to do with the price of acrobatic Orcs? Well, I shall tell you. I ventured on an extended solo walking expedition to Girdlegard… And met a number or Dwarven chaps tasked with saving the land from Orcs and Trolls who were mercilessly invading the world region by region. “Poppycock!” You utter under your very own stick-on beard. Neither Orc nor Troll have the brain power to orchestrate such an endeavour. I agree with you wholeheartedly. But in this case the cunning masterminds behind this devilishly cunning act of cunning are the Alfar…which to all intents and purposes are…shall we say Dark Elves?

What is all the fuss about?

I’m not sure there has been such a fuss made about Dwarves:The Saga expansion. Apart from Rahdo doing a play-through pre-Kickstarter, and Undead Viking, I haven’t seen all that much on t’interweb (as Yorkshire folks are disposed to say). 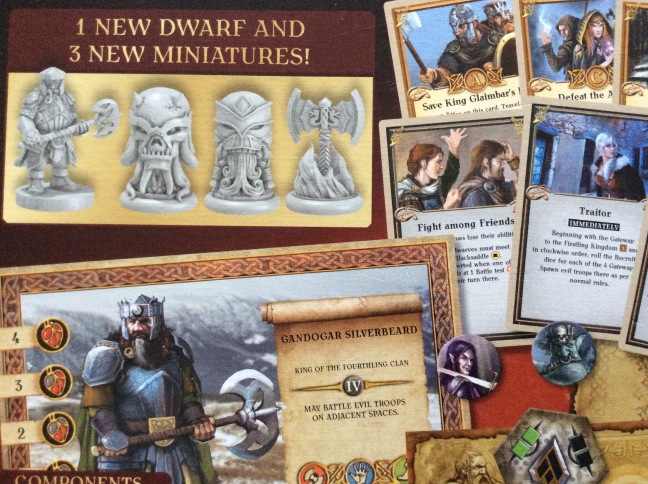 That said, it is a board game based on a series of novels by Markus Heitz, particularly popular in Germany…which is fortunate because they were written initially in German and only recently find themselves subject to English translation. The same is true about the game. The Saga expansion adds some significant changes to the original base game, not least an English version. Fundamentally a cooperative venture, this game can obviously be played solo with the simple requirement that soloist controls 4 protagonists in order to thwart evil advances, solve challenges, avert detrimental world events and keep the Dwarven Council happy (as they, the Council, languish in some great hall, sat around on their fat arses not lifting a finger to help the frontline troops)

It would be foolish for me to say this little chap isn’t laced with theme, isn’t immersive, or has nothing to do with the books from which it has been derived. The graphics on the board, card illustration, flavour text all build a marvelous ambience but this isn’t simply a tacky veneer subtlety layered over some dull game to make it feel “Dwarvy”.

There are a number of nice touches throughout the various game mechanics that make you feel you are part of this group of altitudinally challenged chaps working together to thwart evil. It really feels like a snapshot taken from the novels, helped further more by the saga expansion’s scenario cards.

There are two options of play allowing us either to just wander aimlessly through numerous encounters and events or, and probably the aspect I like most, offer us the ability to, in effect, play one’s way through the first four books of the series. Each book has its own set of adventure cards to work through (highlighting poignant elements of each original novel) and associated goals, tokens and other bits and pieces relevant to the objective. This launches the game into a campaign mode…a gigantic road movie over hills, through tunnels and mis-adventure after mis-adventure. 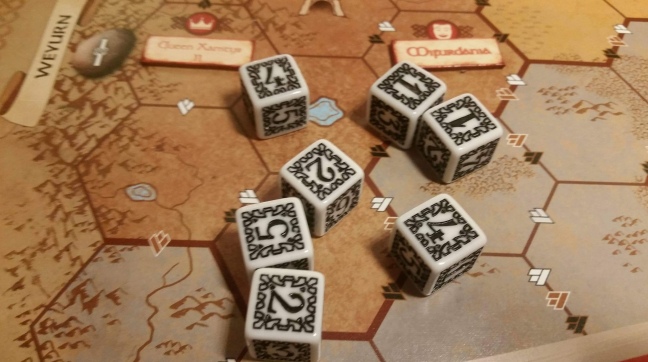 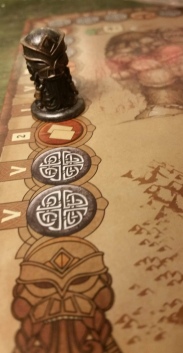 The Saga expansion brings with it a vast array of improved components to facilitate a more aesthetically pleasing and smoother gameplay …but there was a significant “niggle” for me, particularly  over the new character miniatures. I shall touch upon this in due course.

The most noticeable change is with a significantly larger game board, an additional player dashboard (to locate adventure cards and to keep track of the favour with the Council) and much larger Perished Land hex tokens (with improved art work). 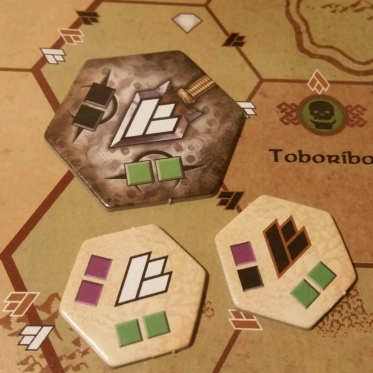 There is also a change in the deck of events and how they are used when playing the saga variation which means that you are playing essentially the same game but in a slightly different style to the generic version. A nice touch I thought. These all come together to make for a pretty large footprint but do open up the play area to accommodate the placeholder standees and…the most significant change from the original…the wooden meeples….or should that be Orples, Troples and Alfles?

The original coloured cubes representing Orc, Troll and Alfar have been replaced by custom shaped wooden meeples which do look pretty decent, it has to be said, especially the acrobatic Orcs (see photo at end of article) I have to point out that, although I do really like these meeples, when the latter stages of a game are reached, the board becomes rather congested and, if like me you are predisposed to clumsiness, the slightest knock can instigate catastrophic domino effects throughout the land.

The components all feel well made and look/feel to have an excellent, cohesive theme, especially the custom dwarf dice and the coloured creature dice…BUT…and here is the fly in the Dwarven ointment…the bloody minis that came with the saga expansion…aaaaahhhhhhhhhh!

Ok the human characters I could understand being tall and thin and arrogantly looking down on dwarves…but in comparison to the base game dwarves, the new dwarf character minis are…… hmmmmm ….Ye Ghads, what a disaster. The photo illustrates my point. The old dwarf models were dumpy, but pleasant figures closely resembling their character card illustration. The new dwarfs, however, have been sculpted in a completely different proportion and style…yes, they are in-fitting with the new human characters but if some dwarves were to receive a new style of sculpt, then why not re-sculpt all dwarves?

At the end of the day they are only placeholder models and this isn’t first and foremost a miniature game so it doesn’t bother me too much (and has absolutely no bearing on actual gameplay) but I just felt a big company should have got their act together on this point and unified the sculpting one way or another. The redeeming feature of the models/characters is that there is an attempt at gender balancing. There are a number of female human and dwarf characters to choose from, each with their own unique abilities/stats. This for me is a nice touch in that rather than choosing a character with male/female art but essentially the same, the female characters have their own special, unique abilities not available in the male characters. Studying and making an informed selection of a multi-gender party before setup is crucial if we, as discerning adventurers, really do seek to achieve success in our mission.

Obviously as a co-operative game one would expect this title to be soloable. But is it a good solo game? I have to say that there is so much going on and so few actions/resources, it really does make for an entertaining solitaire game. 2 action points per hero (and only a limited number of actions available to each Dwarf) make it a simple task to manage all 4 characters. The fun and tension come with not only having to hold back the steady flow of evil creatures spilling out onto the landscape, cluttering the place up and making it look untidy, but to complete tasks within the Saga whilst simultaneously juggling ever-growing threat/event cards.

It is possible to improve a characters stats during a game and to be able to acquire equipment but this is perhaps not as forthcoming as in some adventure-level-up-your-character games. I would have liked to have seen more opportunity to acquire the all important Dwarf Axe or Tupperware lunch box or thermal drawers but I suspect this game is, in essence, more about using what you have to solve the holistic conundrum rather than a Character level up dungeon adventure…and on reflection, perhaps, rightly so!

I have had many entertaining jaunts into Dwarven territory but frustratingly have yet to get past Book 2 in the saga. It really is a challenge and it can be ridiculous how quickly the land becomes perished and over run with green, black and purple meeples. But, as there are numerous cards to randomly select for Act/Stage A, B and C of each saga, and as the perished land tiles come out in random order directing the evil in random directions, and as the event deck is random, no two games are going to play out the same. Dice rolling for hero abilities and for the spawning of creatures features heavily so can become frustrating for those of us that dice hate but careful selection of characters to roll for certain tasks (using personal special abilities) has helped me negate some of the luck element. Sadly rolling for the bad guys has no option but to roll an hope…but that is part of the tension/fun of the game

I did have to make myself some tokens to link a saga card objective to a map location just so I knew where my Dwarves should be heading. I also had to make a series of location nameplates because certain cards reference locations and once covered with a Perished land token, it was tricky to navigate my way around the unfamiliar board…but that was just because I couldn’t commit all the place names to memory. 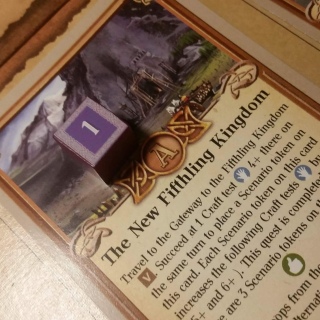 As a puzzle, problem solving game it really works as a solo game for me. Yes, as the only player, we have 4 Dwarfs to manage but as each is limited to 2 action before the turn marker is advanced and, as each character board has only health markers and the occasional attribute statistic upgrade to manage, little needs to be done from a bookkeeping point of view, before beasties galore spill out onto the board. Planning ahead is crucial. Being aware of specialist skills and proximity to target areas for task completion all melt the brain. The game is not like Legends of Andor in its nature of play but it does have a similar puzzle solving feel to it. Dice rolling and luck there within feature throughout this game so bear that in mind. If you hate the cubed little buggers this might be one not to rush into buying. Try before you buy. 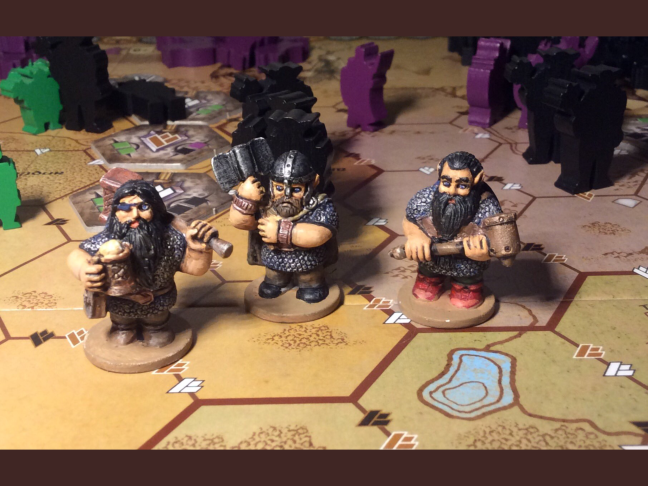 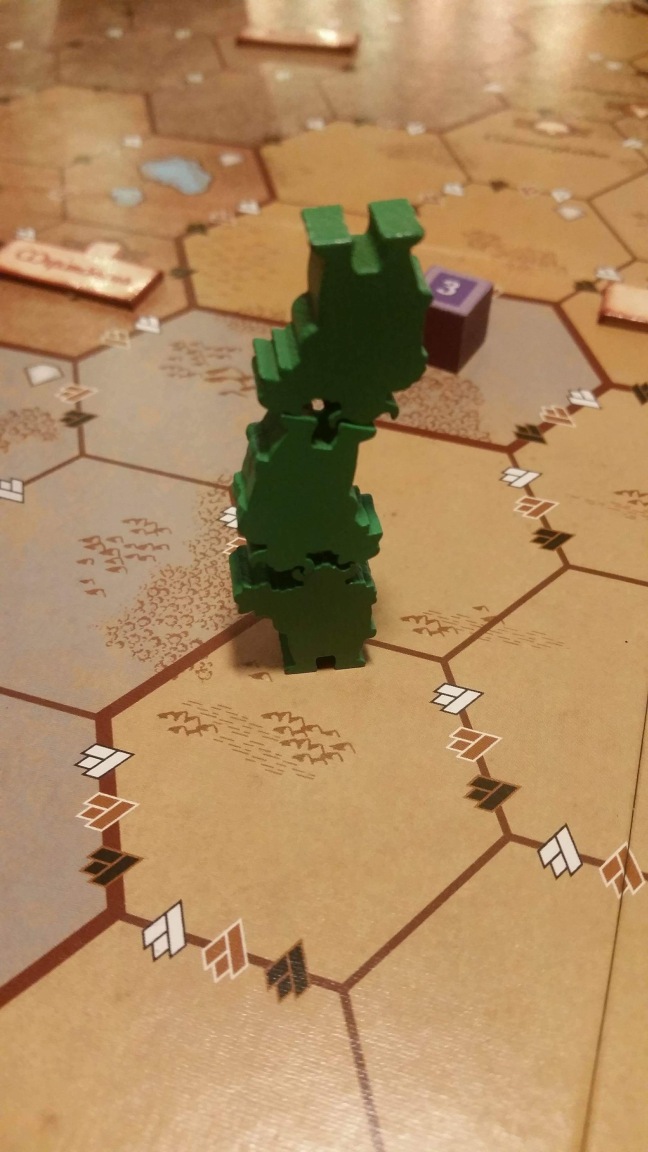