I fancied a break from the dreary British winter; wet, windy, grey, grotty, miserable…almost indistinguishable from our Summer, really. I felt like getting away to some exotic island bathed in glorious sunshine so I taped the plastic globe to a ceiling light fitting, set it slowly to a clockwise spin and closed my eyes as I threw a dart at it. My ingenious method of picking a random destination.

After several attempts, several minor ornament repairs and a puncture repair on my inflatable arm chair, I decided to throw the dart with my eyes open. Success! The hand-sized arrow embedded itself firmly in Crete.

So Crete here I come…how little I expected that I would end up at Retimo Airfield in 1941 in the hight of Operation Mercury which was particularly fortuitous as I had recently brought Crete 1941 Operation Mercury to the table. 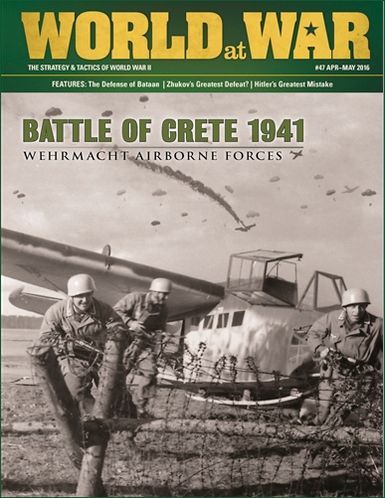 I was a touch taken aback by this little affair. Published in World at War magazine by Decision Publishing, designed by Joseph Miranda, it may not be so widely discussed. I had not heard about it until I stumbled across Stuka Joe’s Youtube play-through and though…hmmmm an interesting war-game that is specifically designed for the soloist…I’ll have a portion of that, thank you very much,.,,and interestingly played from the German/Axis perspective against the game who attempts to keep us at bay with its Allied forces.

This is a more impromptu set of ramblings as, after just a couple of games, I was rather taken by the game..so much so that I felt compelled to put pen to paper…or to be more accurate: finger to keyboard.. In simple terms this is a scenario that pits you, the real player, the soloist, heading the might of the German war machine trying to force out the Allied forces from Crete. I was going to try and avoid referencing the stereotypical view Brits have of Germans always putting towels down to reserve sun-loungers but in trying to avoid the cliché, I have inadvertently put my size 10 right in it. I digress…The game controls the Allied forces by means of a selection of tables, charts and devilish AI cunning (in the form of random, hidden unit selection and the accursed die roll)

There is something pleasantly refreshing about this game. The table isn’t bogged down with a bazillion microscopic counters, ladened with innumerable statistics only visible to the naked eye with the use of powerful electronic image enhancing microscopes. Stats are simple. Left number = fisticuffs, right number = well, apart from aircraft, there is no other number. That’s it. Roll below the counter’s attack number and Kaboom…sometimes we must refer to the occasional Kaboom table for certain results but in the terms of a greengrocer with small onions…that’s shallot.

Boooooaaaaaaaring! I hear you so eloquently eject. Ha! but not so, I tell you.

Staging areas on the map form a large part of the map/game-board where the Axis side store counters, move counters about and allocate/re-allocate units to attack, sea-landing, airdrop or make packed lunches. Each of these staging areas corresponds to a region of Crete and so Axis units are deployed accordingly. This is not as straight forward as it first appears. In simplicity terms, yes it is, but in strategy…what a toughie. All Allied units start unidentified (having random location/placement)  and only through reconnaissance, air or ground assault do we know what we are likely to be up against. And that is such a nice element of this as a solo game. We really don’t know what we are up against until the final minute…then we have to plan like crazy to minimise the ensuing chaos.

Locations on the map, although lacking in bistros, cafes or the occasional pie shops, have an elegant simplicity too. None of your billion 1cm hexes numbered from 12,458 to 32,765 etc. Each location has a name, a region and a box for unit placement. Proximity is indicated by a coloured line and movement is simply between regions (although movement is not quite so important here…no flanking manoeuvres, areas of control, being in supply or stopping off for an over priced, dried up sandwhich on a motorway service station)

There are a significant number of steps to take whilst playing the game…19 in total, which does sound daunting but in reality they are logical straight forward steps governing how the whole game mechanic works. Methodically working your way through each step really does act like paracetamol and take away the headache of managing your resources and managing the AI and moving everything all at once and on and on…so much potentially to forget in normal war-games but here it is all covered nicely

And StukaJoe on BGg has even produced a set of 19 poker sized cards that make following the gameplay even easier. Genius

So, is this any good? I’ve rambled on at some length and not stuck to my normal format but it is safe to say that a holiday in Crete is not complete without Crete 41. With a well presented game-board, simple, clear counters, only a 19-ish page rule book, easy to follow charts & tables…well it all makes for a very tidy package. I have found this such an interesting approach to war-games with its company/battalion/regiment operational scale…

It is tactical but not bogged down in complicated layers of modifiers some games employ. I have enjoyed the game experience and would recommend this to soloist, war-gamers or otherwise…although it is not so easy to come by.

Although I’ve not stuck to my normal format, I will still award this an invasive BSoMT 1d8 die roll of (7)

There is a lot more going on here and I merely scratched the surface but interested parties should definitely check out StukaJoe’s play-through on Youtube:

The files for the cards by Stuka Joe can be found here on BGG: https://boardgamegeek.com/filepage/135398/crete-1941-sequence-play-cards-and-list

(Disclaimer: I remodelled the map to allow me to reduce its size and relocate the numerous charts originally on the map on to separate sheet)