Adventuring, beastie slaying, order carry-outing and that’s just the bus ride out to the Kingdom of Tessandor. I shall, once the festivities have subsided, embark on a solitary quest of micro-cosmic proportions. Find out how it all goes in January 2018 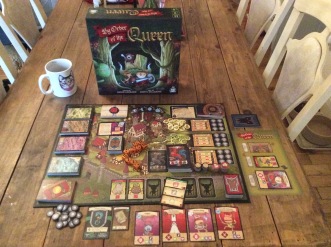 Press play for some inspirational ambience whilst you read on

There’s nowt so irritating as fake animal fur…and this bloody animal costume is nowt but irritating fur…but needs must if I am to fit into an anthropomorphic world of weird and wonderful animals, Koblins and heroic owl-bear looking chappies. Apparently evil is afoot and the kingdom…run by a Queen…a Queendom, is destined to be overrun by a host of cut looking, but no-doubt, sinister, Kunning Koblins, Vulpens and Lurklings. Right! On with my Swift Shoulderguards, a quick polish of my Glacial Epaulettes and loading of my clockwork Gunblde and I’m ready to do the Queens bidding.

A new kid on the block at the end of last year (2017) having been successfully Kickstarted (and turned round remarkably quickly), By Order of the Queen has found its way to both sides of my table. Set for 2-4 players, me, myself and I played with 2 hero hands of cards …just to confuse matters. 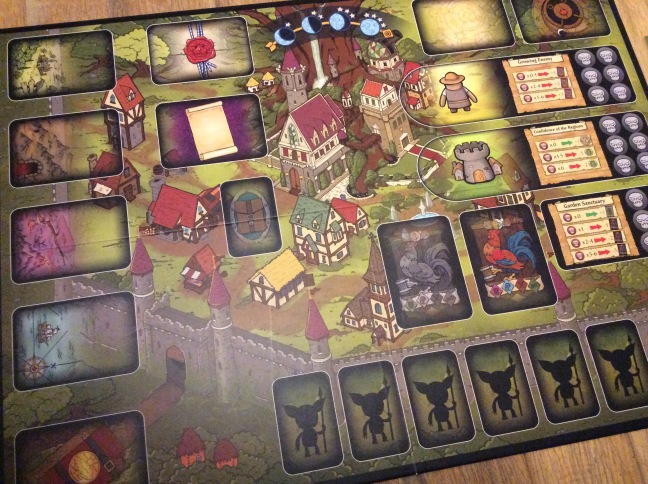 To fill you in on what’s what I shall paraphrase a letter to the Guilds of Tessandor.

Kingdom strong with king in charge. King deaded in battle. Enemies knocking about all over the shop, and a kingdom about to fracture. Queen called upon loyalty of chaps and chapesses throughout the land to defend boarders, embark on quests and carry out Queens orders.

Got it so far? This is a cooperative questing, adventuring, monster whacking dice placement sort of affair. But there is an awful lot more to it than just that. There are event cards that throw a gigantic, wooden carved spanner into the works. There are locations to visit that create something akin to a choose-your own micro-adventure. There are quests to embark on, equipment to acquire, beasties of all shapes and colours to contend with and unappreciative locals that are so dismissive of our valiant efforts.

It sounds like there has been lots crammed into relatively small board game but does it stand up to a decent play?

The game has been lavishly illustrated in what appear to be child-friendly creatures, beasties, oddly shaped personages and a glorious boar but, as you may know by now, I need a lot more than pretty pictures to feel at one with a game. I think I would have liked a small amount of additional backstory to prep me for this world of Tessandor but despite this, this wondrous land does come to life once the action begins. There can be found, in ample amounts, snippets of flavour text throughout the game, most of which is actually integral to the adventure. I imagine that played as a cooperative game discussions could be had between protagonists deciding on who will commit to battles, who will go a questing or who will put the kettle on for a brew. As it is for me, I have only my self to discuss strategy with…but at least I can guarantee a modicum of sensible conversation even if I don’t always agree with all of my decisions. Probably most thematic, for me, are the event cards and the location cards and to a lesser degree, the quest cards.

The event cards dictate changing states of the game, turn by turn. There are opportunities for reward but mostly it is doom and gloom with a constant increase to threat levels (which will be touched upon later). 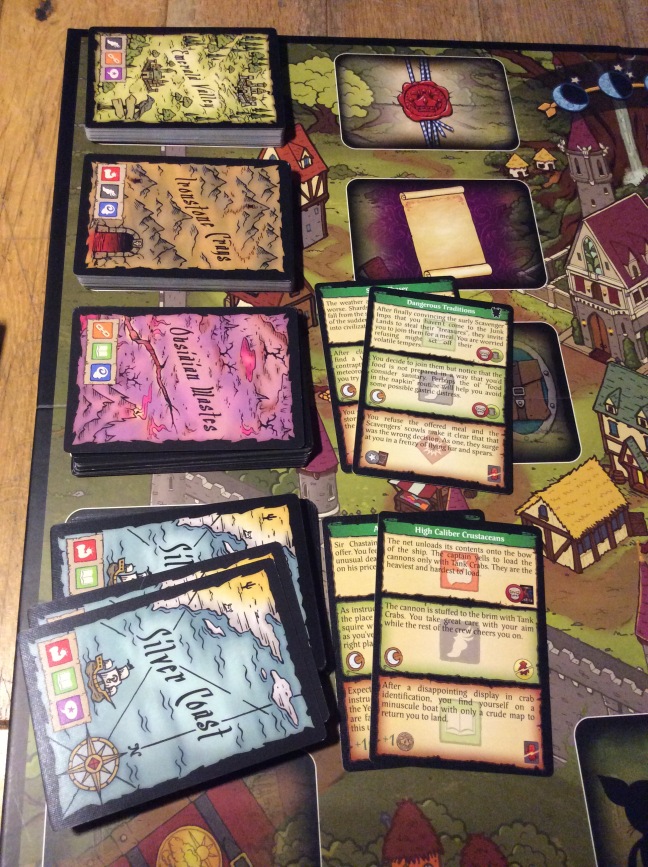 The location cards are probably the strongest story telling element to the game. There is usually some form of task set to test us, the budding solo adventurer, to the max with some description of a scenario…then there is a test to fulfil…and then the ever feared consequences. Success leads us to the next part of the test and rewards can be gained a plenty but failure has its costs. There is a price to pay for failing the tasks but all is not lost for we are guided to a consolation task with its own boon. Taking part in these tasks is vital as it is the principal way we achieve success tokens…and these little treasures are what we need to fulfil each of the Queens orders (Three of these nigh on impossible to achieve orders require completion for us to do  what toothless budgies do…succeed!). I will be honest that I am a little unsure of the actual theme or feel to the game…no, that is not phrased right. Some story text has a distinct steampunk-esque feel to it but merged with a high-end fantasy. It is an unusual blend of both and more, I dare say, which has, like an unusual foot fungus, actually grown on me. As a slightly closeted Steampunk fan, I have been used to a more in-your-face approach to that theme in the past. So this is interesting to be sure and does not resemble foot fungus in any shape or form. 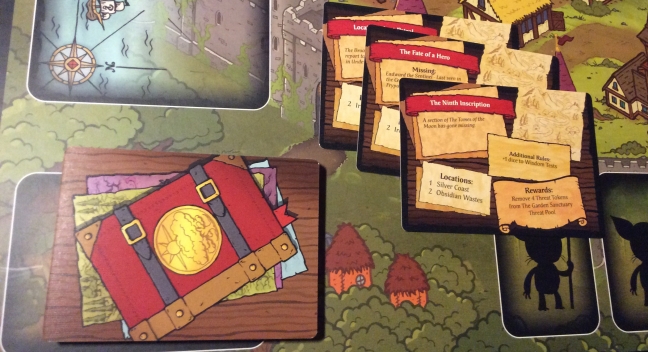 The quests that direct us to a variety of locals throughout the kingdom…Queendom, have nice flavour text but more importantly, when completed, reward us with equipment, or the ability to reduce threat in the Queendom…all gripping stuff

There are quite a number of things going on here.

So all in all plenty of symbol matching, dice chucking and adventuring. There is a feel of resource management as you are directing heroes equipped with appropriate symbols to tasks or tests that require matching symbols to permit dice to be rolled n an attempt to overcome said test. Simple but quite elegantly packaged together offering a particularly difficult challenge.

The quality and standard of production is superb. The board, tokens and various markers are all well printed on sturdy board (I’d have said cardboard but I’m sure the US say chipboard…its thick and strong what ever) and the quality of illustration is equally superb.

The box and rule book have equally good treatment and, without a doubt, when holding the game one’s grubby little hands, it is obvious this is a well crafted game. The rules are no problem to digest, with plenty of helpful game situation illustrations, but there are a few ambiguities here and there (none of which are real game-changers so do not panic). There are a gazillion cards too… most of which are large 64*88mm ish cards but there are still a shed-load of the smaller euro size equipment and beastie cards.

The budding soloist out there would expect a cooperative title to be accessible to a player count of one…but that doesn’t mean it always scales well or is easily managed by one. There can be too many plates to spin at once. I played with 2 hands of cards and not a plate in sight… (as 2 players is the recommended low count) and had no issues managing the cards. There is a lot going on, on the board but it is all laid out well and there is little to overload a single player. As such, I have to admit to this being a very successful solo game. Arguments and decisions were no less having just me at both sides of my table rather than 2 or 3 live players and the game does not discriminate. 1, 2 or 4, it is a malevolent beastie wrapped up in fluffy costume. Beware but enjoy.

I was a little nervous about the theme at first but after seeing how well made and designed it is, I very quickly found myself sucked into this rather quirky, odd world, and found the game was a bloody difficult beast to better. Don’t be fooled by the lovely illustrations. This is not some facile, whimsical children’s game… the cute Koblin baddies, the tranquillity of the surrounding countryside…no…this game is cunning and will chew you up and spit you out without breaking a sweat! I am not dismissing whimsy at all. The game has loads but this is a game that does make you think, despite its simplicity. I am sure it is very accessible to younger gamers but the look of the game is very deceptive. It will test any aged gamer,

It comes down to personal taste. If the slightly cute looking exterior puts you off or you dislike dice placement it may not be fully suited to you but don’t dismiss it too quickly. This really is a good title when played solo to push your grey matter and as such it sneaks up in a cute, fluffy facade and snaps and snarls its way into an adventurous BSoMT 1d8 die roll of (7). A thoroughly enjoyable light-hearted solo adventure with glorious dice made from purest amber…well, a synthetic material that has a look of amber, at any rate!

…well that’s that then.  I’ve got my secret orders, a shiny Prestigious Breastplate and am heading off to the Obsidian Wastes to carry out a spot of investigating…I have to get to the ‘root of the Matter. By that I suspect there are a couple of holes the size of houses occupying the space we would have expected to see trees. As if trees just get old, get up and leave (ha…get up and leaf)…I suspect when I get to looking in the holes, there will be a decidedly unpleasant explanation awaiting me.

Board to Death reviews

Kent Parker how to play