#4 …of Grapes and Cheese oh, and cows (Tuscany)

The hustle and bustle of the modern day boardgaming life…I’m on the verge of tearing up a non-legacy card…I need to get away…away to the peace and tranquility of the countryside…the Italien countryside. Warmth, sun, and relaxation….

(some ambient Tuscan background sounds to set the scene)

Wandering through the vin yard, the heat of the Tuscan sun beating down on my uncovered knees, I ponder the potential of this years grape crop…and then, as the hard realisation that it’s absolutely tipping it down as is its norm for the middle of British summer, I discovered I’m not in Italy at all. Curse you, you thematic boardgame. Why am I here and not luxuriating in the Italien countryside? 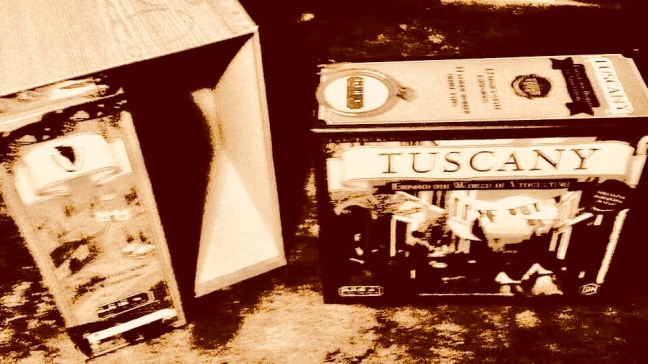 I was rather fortunate to stumble across the Viticulture/Tuscany Kickstarter a year or two back and, as I fell into the money-pit, wondered just what I was buying into. Those heathens I share a house with would not want to spend hour upon hour placing brightly coloured meeples in dirty fields, or crush grapes with their disgusting, dirty toes….the disgusting dirty toes of the meeples, that is, not my family

Why was I backing?

Initially I felt it was a ‘nice’ theme (once, being an avid wine lover, but now after a long term illness rendered me alcohol intolerant, the appeal waned just a little)… but soon the campaign displayed just how the game would turn into a really appealing concept with what promised to be some special art work and interesting Mechanics.
This was not the final  clincher for me, however. Not at all!…the disclosure that some AI chappie called Automa was thinking of joining the affray. Say no more! If I can play a game about making wine without the need of others present, I was finally sold. I could surely cope running my own vineyard from the comfort of my gaming chair…especially as it has caster on it so i can scoot round to both sided of my table.

Immersive or what? I should jolly well say so. It was not just a game about making wine, it was a pure, self-indulgent working summer holiday. Plonking a grape picking meeple…a ‘graple’, shall we say, would not be sufficient to make this an immersive adventure for me. Well, this little slab of sunshine is so much more. It is the way a player’s limited resources have to be thinly spread amongst so many options but not enough time to do it all….a little bit like house work…
It is cleverly structured to closely mirror real life, flies, whistling crickets, lazy dogs blowing off in the shade of an abandoned tractor, migrant workers hired during the harvest. you get the idea?!  Workers are assigned tasks for them to complete from month to month in order to allow subsequent tasks to be completed in later months, year after year …all in a frantic hive of activity to get that highly anticipated bottle of red to the table of the connoisseur.
With the Tuscany expansion an already pretty good game is suddenly ejected into the upper atmosphere. Now you can add cows, make cheese to add to your wine order, olive trees, olive oil, tomato plants, tomato juice, variable set up, special secret goals, even more specialist meeples…spleeples, shall we say? Not only has it about a gazillion small expansion elements within the main expansion but it can be played as a legacy game….oh yes. Do well at the base level and you can unlock a new tier expansion…and so our vineyard expands and expands and expands. Diversification! I even managed to build a conservatory on the side of my farmhouse…not sure how it would help me but it was nice to sit out in during the warm but rainy days, whilst others did all the hard work.

As a multiplayer game this has the potential to work well, particularly as those multiples of players are vying for so few limited work spots each month. How could this possibly be replicated for the soloist? Automa. Automa is the very chap.
Through the use of a simple deck of cards laced with a selection of action that the AI will take. 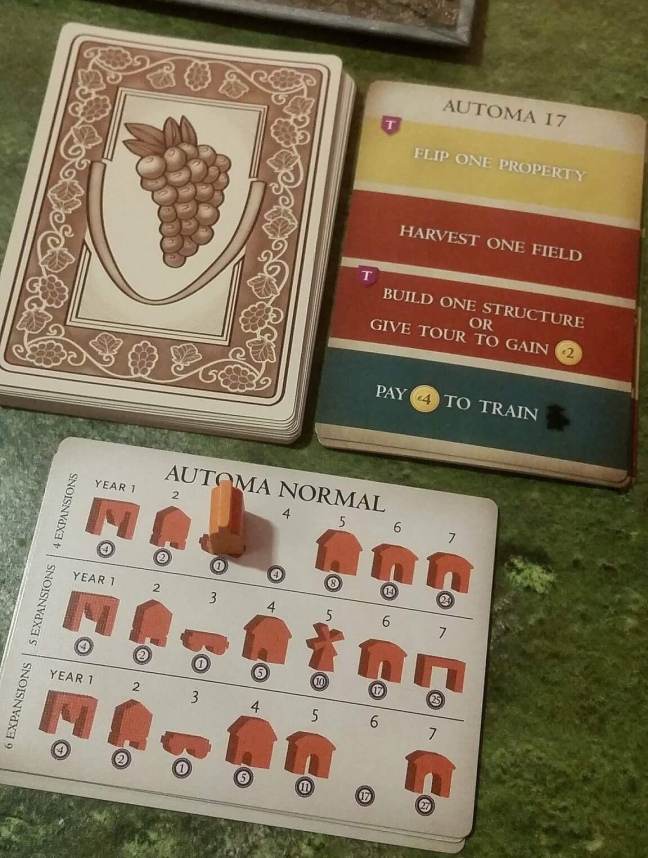 A fresh card is turned each season of the game and allows the AI to place its workforce first. I think this elegant, simple solution is bloody amazing. Not only does it think for the AI, but it also seems to think for me as it knows exactly what I plan to do next. How can it know that? How is Automa all knowing? I can only put it down to some pretty special design work on behalf of Automa creator Morton Monrad Pedersen. There is so much more to the Solitaire game than the cheese crust I have just scratched, or than can be rambled on about here but a more detailed rambling will find its meandering way in the Bots and Wotnots section.

There is little need to wax lyrical at this point. Partially as I have no wax but partially because the components in this game are spectacular from clear, rigid, glossy cards to custom meeples,

to lavishly rendered game board, to sturdy box to the kitchen sink…which would explain the weight of the game, I’m sure. 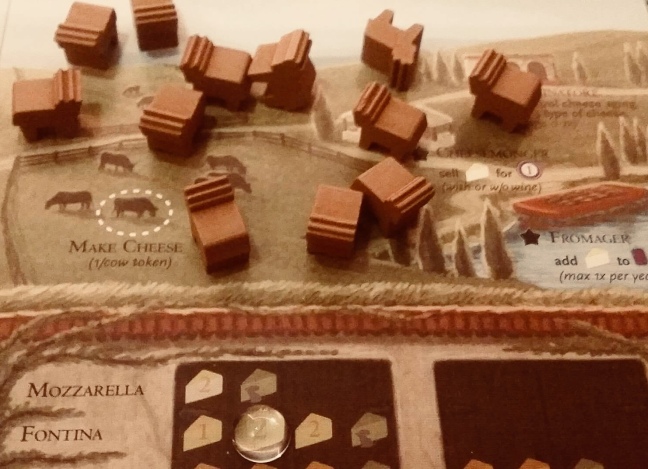 Fundamentally a multi-player game, Mr Stegmaier and associated cohorts have managed to transpose the game over to the soloist venue whilst maintaining that slick multiplayer feel without watering down game play …all to facilitate the solitaire gamer. It is still immensely competitive when trying to place ‘graples’, and all, or pretty much all, the expansions are suitable for integration with the solo game.

Coupled with a progressive running Victory Point total from the Automa that is constantly burdening our slender shoulders, tension is high. I’ve not had opportunity to try this as a multiplayer, but as a solo game, it is incredibly satisfying….even when Automa frequently spits its wine pips in my face

Fans of the Viticulture/Tuscany expansion will be super pleased to know that thanks to (https://boardgamegeek.com/user/schiavonir)…bringing it to my attention, I can guide you towards Morten Monrad Padersen’s thread on bGG where you’ll discovered that has created an eight episode campaign for solo play…this is so well worth a look
https://www.boardgamegeek.com/geeklist/242451/toils-vine-solitaire-campaign-viticulture

Not only is this game an absolute pleasure to behold, wonderful imagery, superb components and a huge wedge of freshly cut gaming…it provides an inovative method of challenging the soloist amongst us. The addition of the Automa cards provide an unpredictive opponent. The choices Automa make are not irrational but have logic and make complete sense for each of the four seasons. How it jnows where you plan to deploy workers next is beyond me but all too often it beats me to those vital locations. This system really does bring a fantastic competative edge to solo play and provides us with something not far from the experience a full multi-player game achieves…I actually think it is better because the Automa can be adjusted, from a difficulty point of view, which a live oponent can’t…and Automa will always be waiting for you no matter how long you leave between turns.

This has to be a Yay! A sifting through the front teeth, nice Chianti Yay! The Automa, with its deck of action cards, a novel way of adjusting the Season track and a seriously cleaver variable difficulty scale make the AI Automa a formidable opponent. Only once have I been fortunate to best it…it is so hard trying to hand milk cows!

With a deep ruby colour, notes of cherry, plumb, tobacco, old ashtrays and dirty old leather and a nose of Old Spice, this grape-crushing extravaganza gets a virtually unheard of BSoMT 1d8 die roll of (8)

If you like wine, wine making, lazing about in a dirty field, crushing grapes between sock-fluff infested toes or just simply appreciate a quality worker placement type affair that gets you out into the fresh countryside, then this is most definitely a multiplayer game that delivers a solo game experience by the oak-aged vat full…and with that, I feel the urge to glug a class or two of red…but not from here because I know who’s toenails were in the vat from last years harvest…

Well, in the fashion of a small onion….that’s shallot