I plunge alone in my leather and brass diving suit, 20,000 leagues below the ocean waves and spend a moment or two polishing my porthole ….in Victory Point Game’s Nemo’s War.

C’mon now, who has left the fridge door open? And of course the answer is no one. That was my unmistakable impression of sonar, 20,000 leagues under the sea…(which in my mind puts us comfortably embedded in bedrock…if we are keeping to the letter…20,000 leagues underneath the sea)

But that has little bearing here as I am not alone. I have, with out a thought to my own safety, stowed away aboard the good ship Nautilus, which is by no means a ship, nor is it good. It is a state of the art, Victorian killer attack sub. Outside the hull all is a deep blue…or so I would assume, as my porthole is clogged up with seaweed. Curse the diet of a sailor! Jules Verne eat your heart out. This is some quality ‘writted’ type stuff here…with letters and words and everything.

INTRO
This brings me nicely to declaring war on the world. Yes, Nemo and I are wazzing about the world oceans, hell-bent on sinking warships, inciting uprisings on the 7 continents, salvaging wreckage, nipping off on jaunty little side adventures and first and foremost, discovering shiny little gemstones. 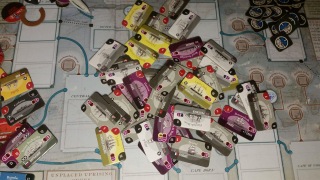 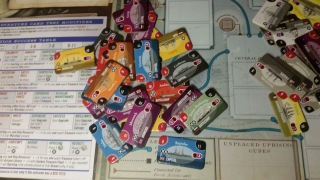 Nemo’s War! It’s a tad tricky to say if this is a war-game or not. There are warship tokens complete with stats, …Nemo himself can take the guise of four different rolls, one of which is that of a warmonger (not a fishmonger as you would be disposed to believe, considering his line of work and submersible home)…and, yes he sneaks upon unsuspecting warships and blasts them out of the water. So the conclusion is, based on this information, that this is a war game. That being said, I get the sneaking suspicion there is an above average sized BUT about to bring itself to the foreground.

What is all the fuss about?

BUT (there you go…told you so) Nemo’s War is a game of so much more than just a war game. “Well, how so?” Those of a slightly more enquiring mind may ask.

This current offering (‘sea’ what I did there?…current?…oh suit your selves) is a reprint…and a noticeably huge re-imaging of VPG’s original effort which, may very well have originally been a fun game, but to me looked a little dated and shabby. This more recent Kickstarter affair, however, is a completely different kettle of fish…ocean of fish? 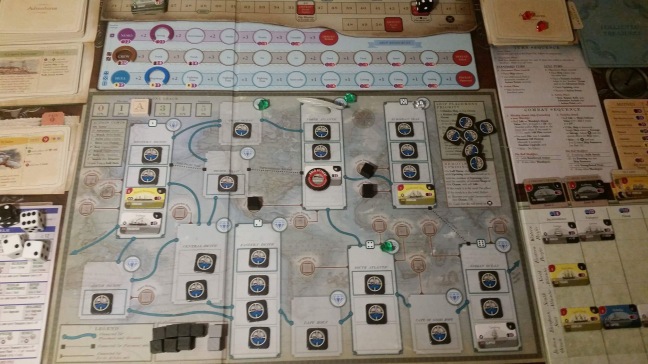 The production quality is pretty spectacular and Nemo invites us all to sail the world’s oceans on a colossal board….on board a colossal sub, that is. As an aside, I have to say that not only does this gameboard look fantastic, but it has pretty much all the reference material is incorporated within the imagery one could ever need…so once we are familiar with the basic gameplay, no constant shuffling through the rule book every thirty seconds is necessary. And that is always a bonus, I find. The nitty gritty of this game is a cunning blend of adventure, exploration and blazoned “shoot the underpants off” the worlds finest examples of floating steel war vessels. So, a win for all walks of gaming enthusiast then?… It does have a little bit of everything for everyone but this is by no means a watered down, badly gelling mash of ideas, trying to compromise and appease the gaming fraternity. Not by a long shot across the port, starboard bow. VPG have managed to make me happy…not as happy as a free copy of the game might have achieved, but I’m not in it for the money…I’m in it to lose. It is the truth. The game is a relatively straight forward concept. No mind-bending, intricate aquatic speciality rules that are only applicable on a Thursday, no, but it is an incredibly tricky balancing act to achieve the ever sought after victory. I have completed the game many times and at best have achieved minor failure. Not withstanding, I am always eager to return for more…and in saying so have completely ruined the tension that should be created in the following “Yay or Nay” section.

Up periscope Number one. I’ve no idea if that has ever been said by any self respecting submarine captain but this title really does dive the player into a submersible, immersion into the works of Jules Verne. From the very special illustrative talents of Ian O’Toole throughout the game, to the flavour text on all adventure cards, to making difficult crew sacrifices …

…for the greater good to the amazing, right through to the period feel to the board. 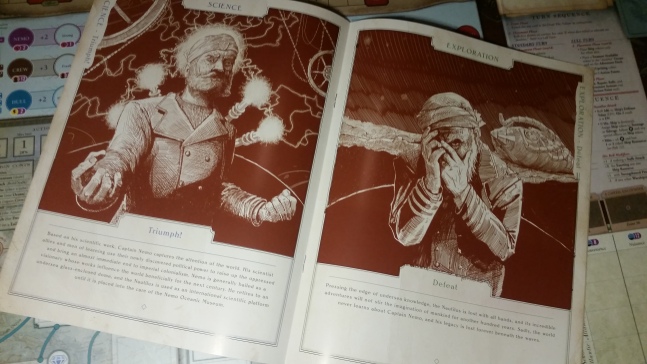 One could almost feel Nemo glaring disapprovingly over the top of his waxed moustache. But I felt it was so much more than just a pretty game, lavishly, period illustrated by Mr O’Toole. The various intriguing game mechanics feel as much an integral part of the package as the way the game looks and it really does embrace the player like a novel unfolding before them. It is particularly enjoyable to be at the helm as Nemo but to have the additional task of stock-taking the ship and crew resources throughout every encounter, exploration…even upgrading the Nautilus (which is not a simple success but requires planning and potential resource/crew sacrifice) Throughout every aspect of the game with the exception of navigating from ocean to ocean, game-play is fraught with peril at every step of the way.

There are so many small, but integral, elements to this game knowing where to begin is a headache in its self. There are a number of good playthroughs out there that will suitably enlighten potential players to their (the mechanics, not the players) every little nuance. But for my personal delight, the Adventure deck, Upgrading mechanic, Nemo Role choice and endgame scoring are the principle features that appeal and make, in my ill-advised opinion, this a particularly enjoyable voyage into solitarianism…made up word! 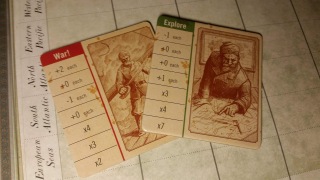 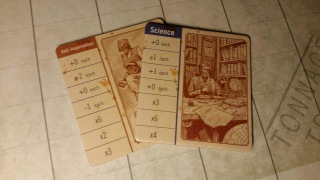 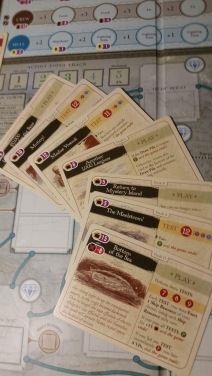 I so wished I’d been brave enough to pledge for the upgraded copy with laser cut wooden components…something about the smell and feel of such…but, not to worry. The cardboard game pieces are wall finished, heavy and do the job just as well. The adventure/upgrade cards have a pleasant finish (although I prefer slightly more robust playing cards) and the board is a monstrous delight to behold. The Nautilus standee is

…ok (perhaps a larger model would have been more suitable for detail) but as it really is only a placeholder token, it does its job admirably.

There are a couple of well made, printed bags which may only be available in Kickstarter editions of the game, which are a really nice touch but by no means add to gameplay.

There are plastic diamond tokens which are a nice touch for exploration rewards (but I was puzzled by the colour choices in my box. If they were all the same colour I could understand but a mix of green white and blue, none of which contained sufficient quantities to attach to each exploration location…so very petty and minor a complaint…and I do not suffer from OCD, but I would like to have equipped my map locations all in the same colour)

Now then! This is principally a solo game (although it does come with a deck of role cards to facilitate a co-operative variation…I have not explored this option so wouldn’t like to comment on its success…the megalomaniac in me want’s full control…not to share, d’you hear me!!!!!) But it is nice to know that it has been adapted to allow for more than just the soloist. Rules for both are decently explained in a lavish, glossy rulebook which, I’m glad to see, has numerous visual examples of gameplay to help clear up confusion. That said Lines42 has a tutorial video which helps clear up any ambiguity. 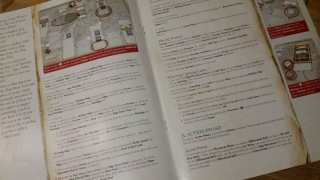 As a solo game, it is us against the machine…or in this case the adventure deck. There is an element of beat your own score but you have to get to the end of the game and, if by some miracle, win, then you can compare your score. Four playing styles and many ways to lose, there is a pretty hefty amount of replay value here so it is going to stay fresh for quite a while.

I found this piece of ambient background music/ambient noise…

…which accompanies my every play. I really enjoy getting this to the table even though I have only risen to the dizzying heights of Inconsequential; a “just missing out on win” condition.

I have even played it camping too. Be warned the footprint is mot so suited to camping tables. Not much more for me to say really. It is lavishly produced and illustrated giving the soloists amongst us great opportunity to explore the world of Jules Vern’s 20,000 Leagues Under The Sea. I would have to highly recommend this title as a compulsory solo title purchase especially if you want a slight wargame/exploration game without getting into heavy naval battle rulesets.

So, as Nemo hangs his head in despair at my feeble efforts at leading the Nautilus to victory, Nemo’s War earns its self an submersible BSoMT 1d8 die roll of (8) for a thoroughly entertaining, all round immersive solitaire gaming experience. 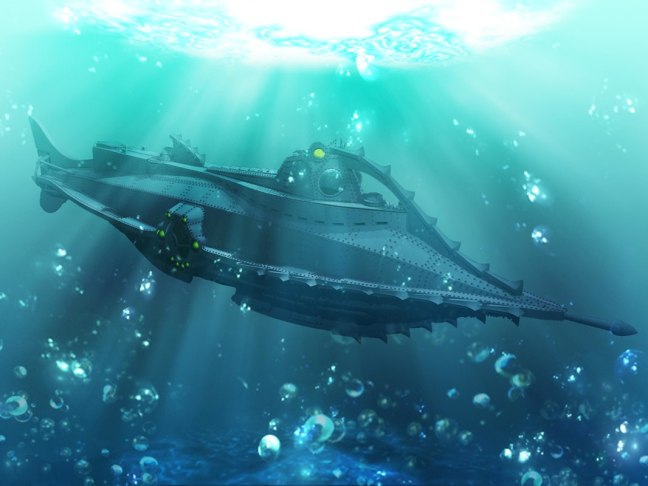 Sadly Nemo found me lurking behind some packing cases and hauled me up to the bridge…it was a large brick and sandstone affair, which surprised me being on board a submersible. As punishment I was billeted to painting the hull…a dastardly task as the Nautilus never left the sea and saltwater was playing havoc with my One-Coat non-drip hull gloss paint. Top tip…don’t stow away on a submarine, especially as it dives and you inadvertently leave the hatch open 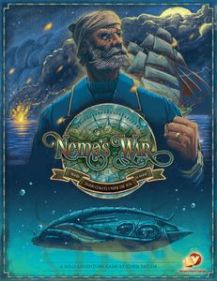