Sun, sea and s….s….sand…everywhere. How does it get everywhere? In every nook and cranny!…and it feels like half the beach has made its way into my cranny…that’ll teach me to use euphemisms and to sunbathe naked on a tropical island beach covered in goose fat! (It was I covered in goose fat, by the way, not, the beach…now that would be ludicrous wouldn’t it?) The only areas not tanned and sore are my palms, which is most fortunate for the tale I am about to relate will involve them intrinsically…

So much for solitude and sub zero temperatures here in the most rural of Shropshire locations. Thoughts of luxuriating on a beach under a tropical sun are but a whimsical fantasy…until, that is, when an e-mail popped up from Jon Mietling at Portal Dragon (famed of  Zephyr: Winds of Change…due to hit BSoMT shortly, by the way) with an invite to play-test Palm Island…a mostly co-operative ‘no surface required’ card game with not only Co-op options but also competitive head to head and solitaire variants of the same game too. Well! It’d be rude not to give it a go. To the printer, quick.

And so my black & white, cheapskate copy of Palm Island was born.

This title hasn’t been released yet but is due to hit Kickstarter in the next few weeks (of writing this article) ..’but what is it and how does it work?’ you may well ask…infact I believe you did ask it well so I shall endeavour to enlighten you.

First and foremost this is a play anywhere game. The cunning game mechanics that employ hand and resource management require only a pair of hands. No surface required means it can be played standing, sitting…I even played it in my doctor’s waiting room (I did have an appointment. I didn’t just roll up and start playing there for the fun of it)

The goal is ultimately to score rustic storm-shelters full of Victory Points achieved by constructing/upgrading a variety of buildings on the tropical island paradise. 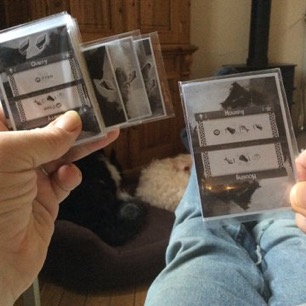 The current illustration style, layout of icons, lavish beaches, tropical fauna and general handling of the graphics generates a delightful island retreat feel from an aesthetic point of view, but fancy pictures alone do not maketh a game.

At face value it could be construed that this is just a card mechanic that could have any theme pasted on to it, which could be true until one plays the game. All the actions, the resource management and card synergy really add to this frustrating survival on a tropical island, pitting yourself against the elements and the…

environment. The artwork to date does look amazing and certainly adds to the experience but it is how all elements come together to plunge the player into this survival theme. I think the whole concept pulls together really well and is increadiblly engaging.

Portable deck manipulation! That’s a phrase and a half!…probably the most intriguing aspect of this little number is the fact that the entire base game revolves around a deck of only 17 cards held, played, manipulated and managed entirely in the player’s hand….

…Madness! 17 cards can’t equate to a successful resource management game…or so one would be disposed to think.

The cards themselves are particularly cleaver in layout. They are multifunctional and double-sided. To exemplify this feature let us take a Canoe House card. In its starting  orientation, it has an action box available when played that provides 2-3 different options. It has a free action that permits the card to be rotated sideways 90 degrees (and placed at the back of the deck)

providing a Fish resource that can be used when attempting actions on subsequent cards. It has a Rotate 180 degrees action (that requires payment of a Fish resource) to rotate the card, placing it at the back of the deck…when it cycles to the top of the deck it will have a stronger action/ability choice. There is also a third action that, when a Fish resource is paid, permits the card to be flipped to the back side offering further, more powerful enhancements. And so in this way the card can be, from turn to turn, upgraded.

Most, if not all cards work in this way all having the possibility of being upgraded, providing progressively more options for the player 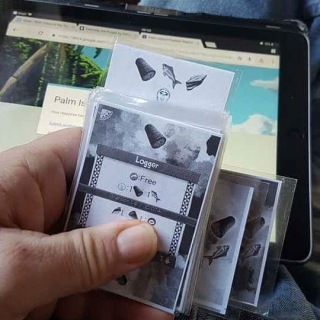 There is a simple, but tricky (from a dexterity point of view until familiar with the process) hand management mechanic. The top card is drawn from the deck and held in the right hand. Now this card can be used or the top card of the deck. If used for its resources, either card is rotated 90’ and placed at the back of the deck. This can be rotated back to pay for another card or stored in its current position. A maximum of four cards may be stored in this way which on face value doesn’t offer much wriggle room…but remember as cards get upgraded and cycled through the deck, they rise to the surface and can be snatched up for their greater resource power…many of which have up to three resources rather than the basic one.

If a card can’t be used/played or is just not needed it is discarded (keeping its orientation) to the back of the deck. Sadly discard preference has to be from the right hand card…so imagine you have a building card in your right hand and have been building up resources ready to construct a great temple ….then out of the blue a wooden hut pops up on the top of the deck…to discard this unwanted shack, the temple needs to be discarded first scuppering all your plans.

As building cards are upgraded in a similar fashion to the resource cards (although they are only rotated 180 or flipped and placed at the back of the deck) they score progressively more Victory Points. Some buildings offer small VP but have additional abilities/resources that can be drawn upon…others, like houses and temples, grow in opulence, providing points galore but have no use other than their Victory Points. This is a nice payoff…They score high but simultaneously clog up your draw deck.

The game is times to eight rounds. The use of a timer card assists with this duty. When it reaches the top of the deck it rotates 180’ from 1 to 2. When it gets to the top a second time it is flipped to 3 and finally rotated to 4. This is repeated twice giving us out eight turn timer. By the end of the eighth round all buildings/resources that have Victory Points on them are tallied up to give a final score

Watching a play-through will make far more sence than my uncoordinated ramblings. (See below in the “Something For The Weekend, Sir?”segment for videos)

Obviously pre-production…and looking at my shabby black and white effort is no basis to judge the game and its quality but from an art point of view it is already looking extra special and, as with many Kickstarter projects, I have no doubt quality of components is something that will be talked about, discussed and debated at length. 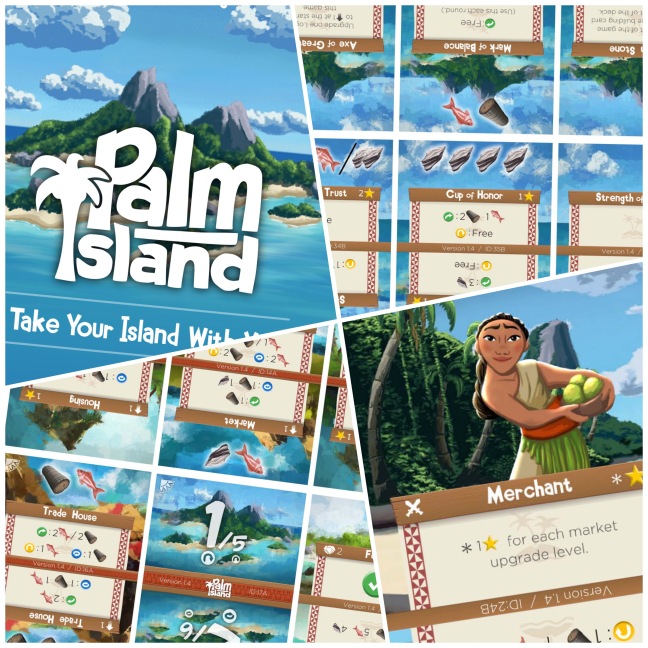 Portal Dragon’s Zephyr was produced to a high standard and fulfilled in a timely fashion so I have every confidence it will be the case for Palm Island.

This has mostly been about the solo variant which is a super “filler”game. I hate the phrase filler because it feels to me like it is a derogatory label deeming such games as inferior. This is by no means an inferior game. It is pretty balanced, even in its pre-campaign state, and provides a player with some difficult decisions. By filler her, I mean that it can be played waiting for a bus, on the train, queuing at a cepretty much anywhere where you have 15-20 odd minutes spare. Though I have only played this solo, there are a number of additions to make a challenging co-op game against disaster cards and competitive additions to make a head to head survival of the fittest game.

I have to admit I was a little sceptical at first…partly at the low card count, the fact a solo game is just beat your own score and partly at the unusual format but after just one play I though…’ang on!…this is bloody brain burning! And it is. There are so many things to contend with in developing a strategy. Which resources do we develop to enable which structure…can we tactically discard to reorder the deck so cards we want cycle to the top quicker…so much going on. But it doesn’t stop there. Villager cards can be added with their special abilities that can be drawn upon (they give but also take…I got stung badly by the Navigator who provided me with direction to resources a plenty but took six Victory points from me during the end scoring). There is also a Feat expansion by which completion of certain tasks/win conditions earn the player a special ability to be used in future games…and boy are they ridiculously tricky to win!

The beat your own score motif is not an issue for me, for once. The game its self is so engrossing that the end score is not a consideration and there is also a graduated Success Table from which we can determine just how badly we did.

Without a shadow of a doubt this is a yay! Cleaver, minimalist, aesthetically pleasing and good fodder for the grey matter. Palm Island in its unpublished, pre-kickstarter state suns its way into a BSoMT 1d8 die roll of (7). Fun, compact, challenging and one to seriously look out for when the campaign goes live. (11am EST 27th February)

And now my physical copy has arrived, it is a wondrous and glorious thing to behold. 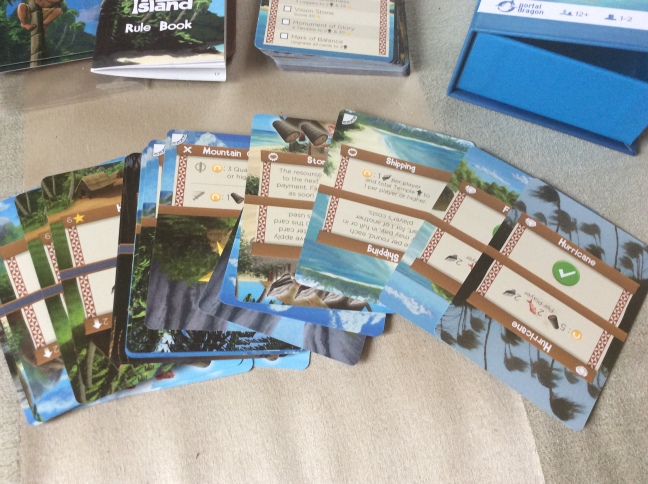 …hay ho! At least the sea has washed off the melted goose fat….but, to my dismay, a palm leaf had stuck to my chest without my noticing. Oh! Would you look at that!I look a proper fool now with a white leaf shape in the middle of my red chest! This is the last time I camp out naked on the beaches of Hawaii…