#7solo…of Tentacle Nests and A4 Quests

Now in all my days as an avid dungeon explorer I never expected to be stood on top of a piece of paper, fighting for my life against disembodied purple tentacles. What ever next? Demonic possessed snowmen?

Ahhh! ….fortunately I have a photograph of my trusty genuine imitation plastic Excalibur replica and suitable shin protectors, thick socks beneath my sandals and a first aid kit for dealing with nasty paper cuts.

I must begin by admitting I am not a huge dungeon crawling fan. Not to mention the mess it makes of leather knee pads, I find it somewhat tedious to spend hours traipsing along corridor after corridoor, whackety bash with every unpleasant beastie I encounter then unceremoniously loot their still warm oozing corps. (I will make an exception for Shadows of Brimstone)…so why the bloomin’ ‘eck am I undertaking a dungeon-like quest now?, I hear you yell with understandable dismay.

Sometime last year I chanced upon A4 Quest…a quest on a piece of A4, no less. The illustrations were stunning and the whole concept interested me strangely so I downloaded the bugger and set to printing the dashed thing out.

Up until now I don’t think there has been too much fuss. It has been a somewhat low key affair on Facebook. I followed with interest as the project was refined and four adventures were made available for players to try out. Well, I had to give them all a go. It’d be dreadfully rude not to. Each of these adventure/quest/dungeon crawl pages came with a new hero…even side-kicks were introduced.

And so a mini series of adventures found their way on to both sides of my table.

Sceptical at first I will admit, but I was rapidly won over. A simple, economic gameplay, lavishly illustrated puts us, the solitaire adventurer, right in the thick of the action. Not unlike a platform video game really, we hack, slash, manage resources and generally do dungeon-crawly things from room to room…from festering bog to putrid swamp, as we encounter ever increasing levels of resistance until that inevitable moment of locking horns with the Boss Monster (so far none that I have encountered have had horns but I am sure you get the general analogy)

So, considering this game is only a single piece of A4 paper, creating eight encounters (some of which comprise three consecutive elements to complete), there is an awful lot to contend with. It is a light filler when all is said and done, but playing this really does not feel like a light game…it oozes excitement, tension and grabs you by the short and curlies like much more complex example of the genre.

It is not beyond the realms of feasibility to mix and match adventurers and adventures…come to that, each room/location could be cut up and mixed together to make an adventure of madness…

A4 Quest is a solo adventure game in which the budding solitaire hero will face hordes of monsters while experiencing locations. The principle goal is to complete specific tasks while making sure that the character stay alive! Progression is the name of the game. The hero is always having to advance from room to room, encounter to encounter as the game relentlessly throws its dirty underwear at the hero.

Managing dice is a key skill, by assigning them to the most advantageous use for each element of each adventure. Choose from available actions on the field is crucial as there is a distinct need to plan more than a few steps ahead! Arranging food so that a hero is able to recuperate is another key element because if we don’t our lowly hero will surely bite the dust sooner than we anticipate!

At the beginning of the game we are instructed to roll 4 hero dice that will compose the dice pool. If the result is not satisfactory, up to 2 dice may be selected and rolled again. The result of the reroll must be accepted. These 4 hero dice will create a pool of options needed to perform actions or to be used to fight enemies.
When a die is used, it is exhausted and should be put aside in a place where we will
be keeping our inactive (used) dice. Dice can be recovered through rest (PERFORMING ACTIONS or REST)

Movement is mandatory but movement within an area is free. The expenditure of valuable energy is only needed moving from one location to the next.

Icons indicate the types of actions that can be taken on any given area and one must be undertaken from Searching, Hunting, Resting and Questing. All actions use dice (apart from rest) but this is part of the joyous balancing act….oh and there is always combat.

There is a simple set of charts under the adventure sheet that indicate what die can be used for, for each action.

The hero progresses through to confront the final “boss monster” where an epic showdown takes place.

As this has been a print and play game the component quality has been as good as my printer, which to be fair is mediocre. The iconography is clear and the illustrations are excellent so it s s feast for the eyes. This has just gone and launched itself on Kickstarter

…a double header with A4 Quest and a second title billed as Page Quest both being run by Board & Dice and the project looks like it will grow into a longer running physically printed series. I was particularly taken with the idea of Santa having to fight his way through marauding snowmen to get to his crashed sleigh. 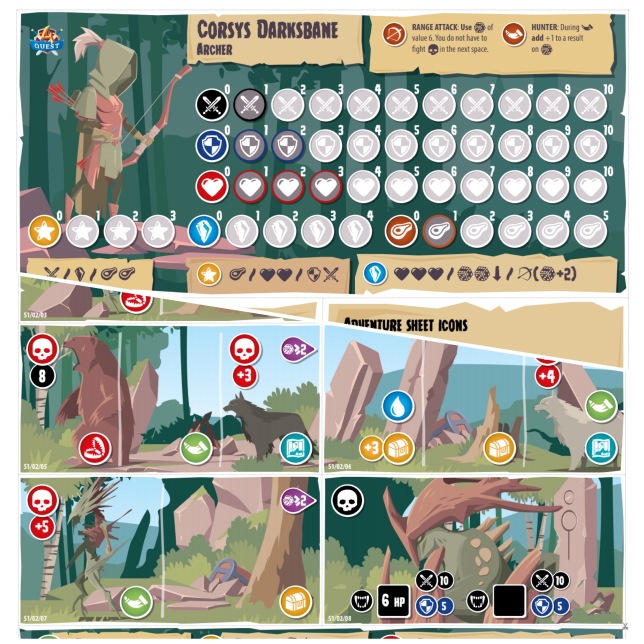 The only name I am familiar with is graphic designer Paweł Niziołek but I am sure checking the Kickstarter page will introduce other members of the team.

Nothing more need be said here other than this is a really enjoyable short, solo dungeon crawl adventure with a tiny footprint (one A4 sheet for the adventure and one A4 sheet with hero stats tracker and player help sheet). I know dungeon crawl doesn’t appeal to everyone and it is not re-inventing the wheel but the way it has made its wheels; compact, streamline and easily accessible are all to its credit and even non-adventurers might enjoy fifteen minutes of high tension exploration.

As I mentioned, I am not a huge dungeon crawl fan. Neither is myself but this was thoroughly engrossing and even Me enjoyed it. No complex stats, modifiers, extensive equipment lists or soul-destroying book-keeping but simple, streamlined adventuring. There is enough challenge to keep us on our toes and a rule booklet that consists of about five pages.

Without a doubt for simplicity and game experience this slithers and crawls its way into a BSoMT 1d8 die roll of (6)…though I suspect by the time the Kickstarter campaign has finished with it, it will have improved content and may be pushing a good 7.

It’s no wonder I’m bloody freezing. It’s snowing and I’m surrounded by snowmen from hell…how does that work seeing as it is stereotyped as a flaming inferno? Flame retardant snow? The fiends! Now I really have got my work cut out for me. A frozen lunch box, no feeling in my toes and the wind is getting in at the sides of my knee-length brass deerstalker. C’mon you frozen idiots…

…what? They’re throwing their snowballs at me…quick! Leg it!

House of Nerds How to play