Right! Fill the back boiler with ten gallons of coal, stoke the horse-drawn zeppelin, check safety steam-pressure outlet valves, polish all goggle lenses and load the exploding cows into the bomb bay. This is war…. 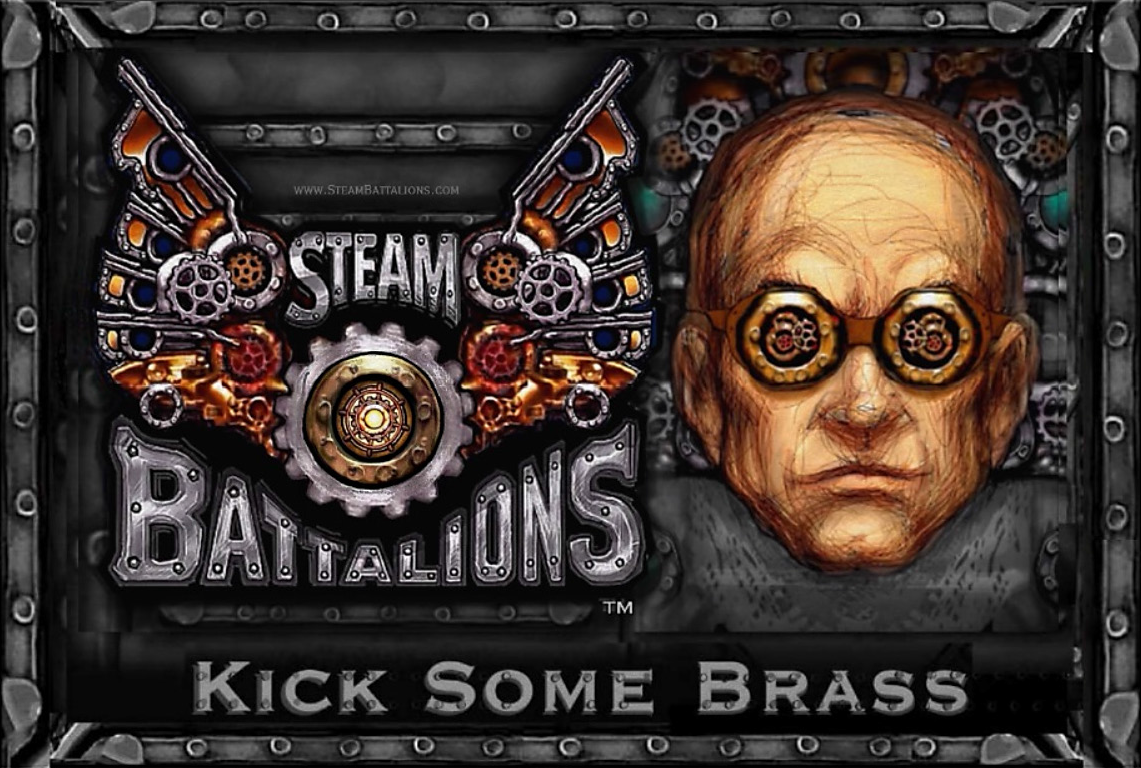 Press play for a Steampunk ambiance to accompany your read

– THE STORY – “In an alternate past, the great wars of the early 20th century are waging high above the clouds and across the mud-filled trenches of Europe. The armies of the World’s Superpowers battle for supremacy with elite units forged in brass, iron and steel in a technological arms race powered by diesel and steam. You and your opponent create, customize and command your own elite Steam Battalions of Deck-Dueling Steampunk and Dieselpunk Dirigibles, Airships and Superheroes and send them into battle equipped with powerful Upgrades & Tech in the quest for Victory!”

I’ve always had an interest in all manner of things Steampunk and so when I was asked to take a look at a non-collectible deck-building card game by……, I jumped at the chance. Now this is a slight departure from the norm here on BSoMT as this is a dueling game for two players, without a solo option. So what is the fuss about? 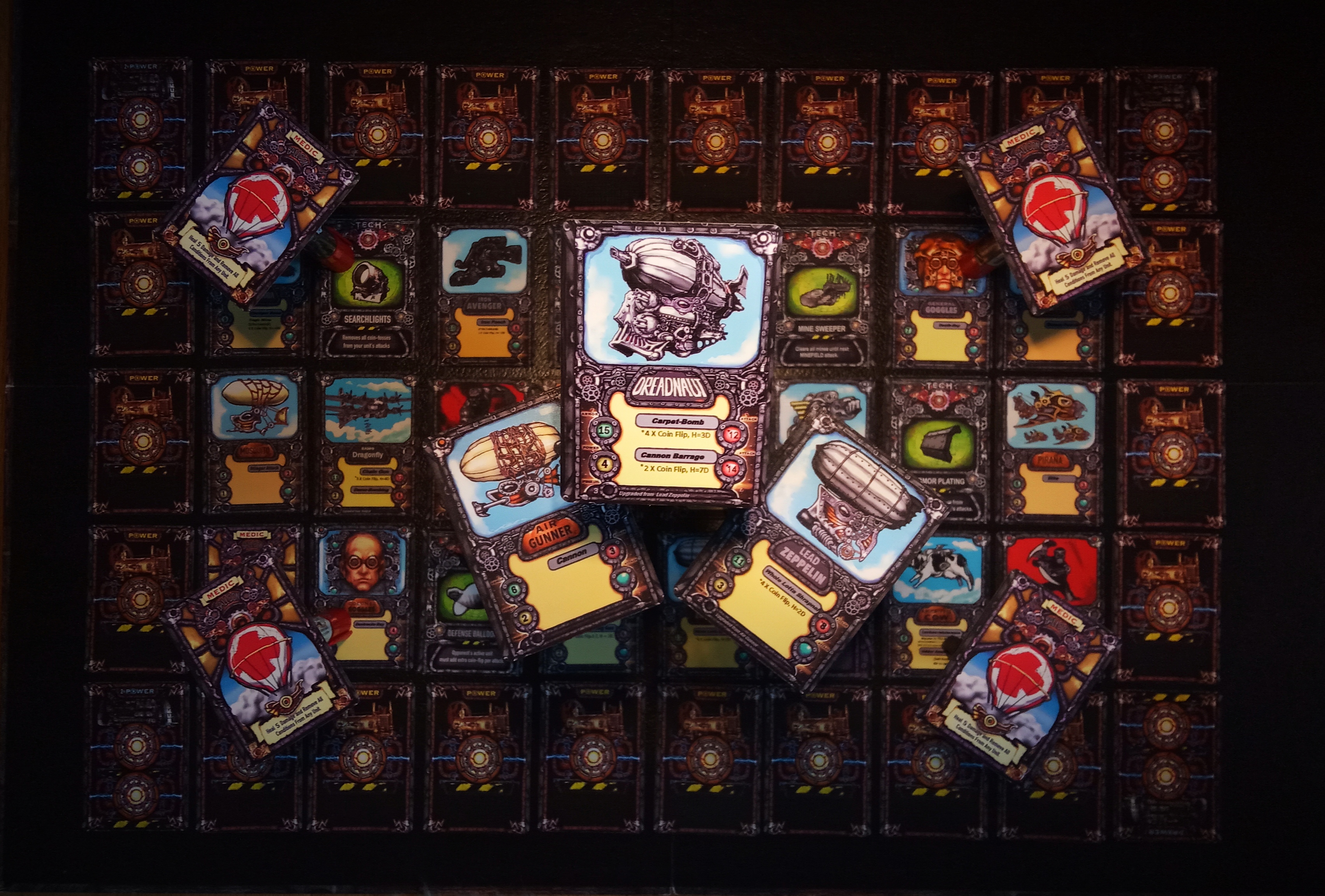 Obviously when viewing any graphic imagery connected to the game, it is set in a steampunk/dieselpunk  world. Interestingly the steampunk element has a distinct humor not always present in this genre. There is a clear mechanical Victoriana feel to the card visuals, but it is within the individual card illustration style and individual card text, that the dark humor fully emerges.

As the game revolves around combatants caught up in conflict, all manner of Steampunk-esque craft, characters from the game’s universe and appropriate weaponry reveal themselves. The game does not delve too deeply into the history/backstory of this Steampunk world, but the game mechanics do draw upon the notion of technological advancements of the setting, and as such, developing the machines of war and those who use them becomes as important as the actual conflict its self.  I felt my games thoroughly immersive. I was not playing some abstract card game with a thin Steampunk veneer, I was totally focused on developing my faction’s ability to withstand my opponent’s onslaught.

There are a number of forces at work here, and all actually gel together surprisingly well, making a game-play noticeably different to many other card-games of a similar dueling nature.

Deck-building and hand management are the principle driving forces behind the game but this is not handled as I expected. Players start with a hand of cards, some of which are places into a Trench (essentially a reserve area where cards can be called upon to take up the ‘front line’ of attack. This is also visible to the opponent) The Player’s deck has the remaining cards, from which cards are drawn into the hand as part of game effects and specific segments of the game turn. Where the game becomes really interesting is the way cards can be played and used to affect an opponent. In the Trench, basic characters, powered flying machines and dirigibles reside, but during a turn, these may be upgraded to much more powerful assets. Obviously opponents are able to see your newly upgraded units, but this is where tactical gameplay/strategies become most important, preparing for what will become the inevitable. In addition to strengthening existing cards, a player can add Tech cards, introducing technologies that can aid one’s own forces or hinder those of the opponent.

Power cards are also a vital element as no card can be used in the front line unless its power requirements have been met.

For a fairly simple game there really is a lot going on. Merely building a strong deck of cards from a reserve pile would not be sufficient in this game. We must focus on our opponent’s actions but all the time consider which units to deploy to the front line, how and when we power said units, choose when to upgrade cards, decide when the optimal moment to employ Tech and when to heal cards in play (only a finite number of medical balloons are available for this task) This is about how we use the cards we acquire to optimum effectiveness.

All of this will, hopefully lead us to reducing the health of our opponents attacking unit, and, when reduced to zero health, will earn us a valuable victory point as we both strive to be the first gaining 7 Victory points.

What I neglected to mention earlier was the fact that players are able to customize their decks before play. A total of 68 cards are available to each player and although the decks are identical, it is unlikely both players will be playing with the same combination of cards. This adds to the fun of strategy and ensures entertaining re-playability. 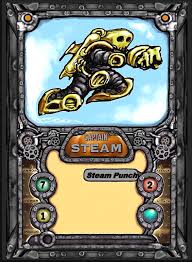 The base game consists of two decks of cards so the component count is minimal. The cards themselves are of a good, sturdy quality, each with sumptuous art. My only criticism with the cards is the card ability text font is a little tricky to read on a couple of cards as it was made Bold. I can see the font was chosen to complement the theme and, in my view, may have benefited from not having been printed in bold. It does not make the couple of cards impossible to read, but with eyes as duff as mine, it can be a significant squinting job for the first read.

I pinched the red and blue hearts from Tears to Many Mothers (Hall or Nothing Productions) to help me keep track of health and victory points during play. The rule book suggests using pen and paper to keep track but I am far too lazy for that kind of carry on.

As a dueling player verses player game, this is definitely not a solo game, and with some of the decisions that must be made, I imagine it would be a particularly difficult task to develop an AI logic flow chart to facilitate Bot decision making. However, if someone does achieve this, it woul make a pretty decent solo game

I hate total chance, luck or any other element that I have no control over but the Coin flip abilities of some of the attackers did add an interesting level of unpredictable tension. I was surprised at how fast paced the game was and how quickly fortunes can change. At one point my opponent had an incredibly powerful, very healthy card in the attack position and I was certain all my reserve titchy cards would be annihilated…until the Apocalypse Cow came out and self exploded, wiping out my nemesis. There are a lot of clever little combinations to be found and tensions are always running high. It turned out to be a surprisingly entertaining game that played quickly, but called for a lot of strategic thinking (flexible strategies are a must as fortunes chance so quickly)

I imagine that this comes down to an individual’s game tastes, but if head to head challenges are your thing, regardless of theme, then this is definitely for you. The pace is fast, the nuance deep and tactical decisions are a plenty. So, Steam Battalions send in a Spyborg to steal power from the BSoBT 1d8 die and convert it to a most creditable 7

Colonel goggles are buffed to a dazzling shine, so now I have only to bolt on a few gears, tie on a tension strap, polish the brass bed rail and nail down a selection of antiquated cogs…let’s see if I can’t upgrade this bloody Mosquito to a Wasp…