#8…of Woollen Vests and Heroic Quests (The Witcher)

I like an adventure as much as the next man, woman, dwarf, bard or whatever, but this trekking about the countryside from town to town, side questing, main questing and thermal vesting is bloody exhausting…and there is so little time to get everything done! I’d better pull my socks up, sharpen my wit and polish my knees because there is some serious hack, slash and bashing to be done. Let I, accompanied by me and myself, go forth into the world of The Witcher.

…in retrospect I regret the decision to select woollen undergarments. At first I was under the misconception they would help stave off the cold but the harsh reality is that most of the realm is pleasantly warm, wet or indifferent and these garments are completely waterlogged now and sooooo itchy!

…my only decision now is which beloved hero I shall embody…do I shave half my head and loose 100cm in height, or do I dye my hair red and wear a false bosom enhancer, or do I don a prosthetic scar over my eye  and look moody or adorn an ever so butch-camp look and go about the countryside singing of this and that? 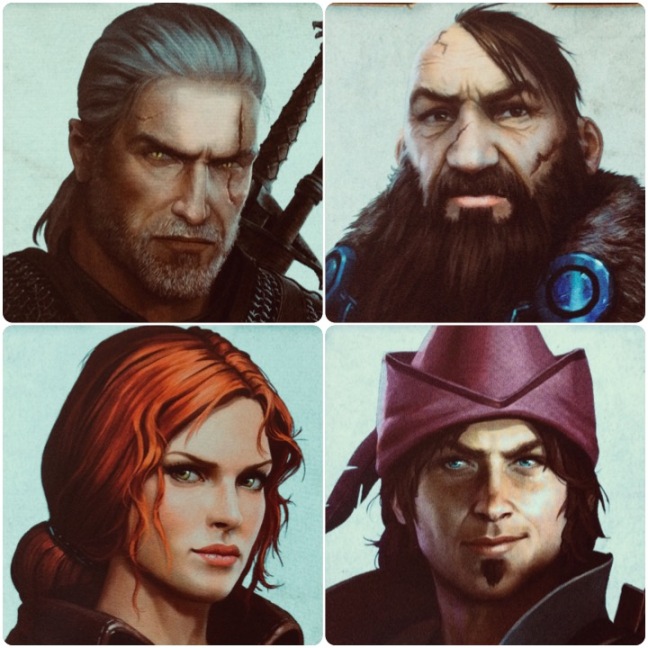 What ever my decision this is none other than a BSoMT solitary look at Ricky Royal’s solo variant of The Witcher!…the adventure board game.

A FFG board game based on the video game, based on the book (Andrzej Sapkowski), based on the tram, adapted from the original cardboard cave drawings. The Witcher is a pretty expansive franchise which I have absolutely no intention of exploring without the aid of a safety net. I am here to pretend to be a hero…on my own…solitaire style….which brings me nicely to the subject of packed lunches. What should an enterprising adventurer stuff into his rucksack? Does a hero really need a bulging lunchbox to impress the locals? I don’t know the answer but according to the rule book “nekkers” are crawling out of the void so let us adventure on 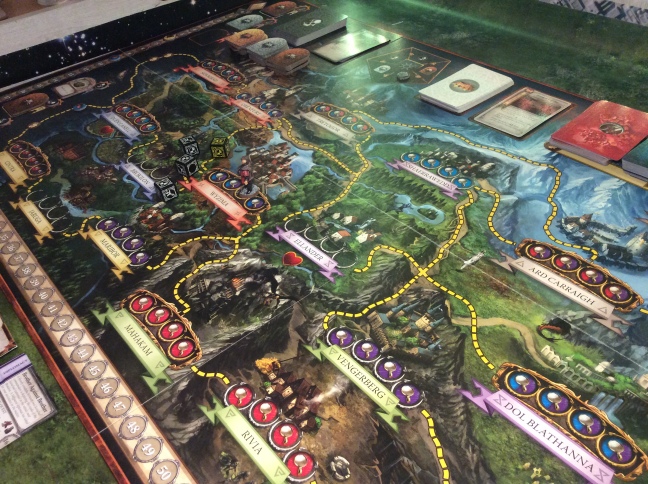 In brief the multiplayer game requires players to assume a role of one of four heroes, each with different traits, abilities and powers. They journey about Witcher World doing this and that…

Epic quests are drawn and heroes need to investigate leads throughout the realm in an attempt to complete said quests and consequently earn victory points. In effect it is a race to the finish. Highest tally of victory point  at the end wins. Some abilities and tasks require a small amount of player interaction but on the whole it is more like a solitary dash to the finishing post. On the face of it, it sounds pretty dull but the flavour text and theme to each quest give a certain purpose to the game.

Now I have never played this multiplayer…I don’t even know why I initially purchased it but having inadvertently stumbled across Ricky Royal’s (Box of Delights) Youtube run-through of his solo variant, the World of the Witcher took on a whole new perspective. I needed no opponent, and as the style of play, for me, lent itself to solitaire play I could plunge myself into the adventure and the game became more of a story-telling personal adventure of discovery…discovering just how much there was to do and how little time there was to complete it.

I may stomp on the occasional toe with my steel toe-capped sandals here but I am always a little sceptical about big franchised products finding their way in to board game format. Glossy images can often blind us to the lack of mechanical substance within the game. I feel there is an element of this here. It looks stunningly well illustrated but as a multiplayer game it does seem a little weak, especially as there is so little player interaction.

With all that said, the solo game is a completely different kettle of fish…and why people leave fish in kettles is beyond me. The game plays exactly the same for the soloist as for multi-play but the solo mechanic Ricky has introduced is an ever ascending score system that simultaneously acts like a game timer. This alleviates the need for us to operate any form of opponent, no charts, no intervention of tricky decisions on behalf of the AI…we are left alone to concentrate on our quest investigation and can immerse ourselves into the unfolding storey.

So all in all, as a solo venture, this is a game presents a soloist with the opportunity by which they can fully immerse themselves into the unfolding adventure.

The state of play is pretty straight forward. Each hero has a dashboard with a set of five potential actions from moving to investigating (encountering cards at a location that can result in investigation tokens/leads but more often than not, result in something despicable) to developing (acquiring new skills and abilities) 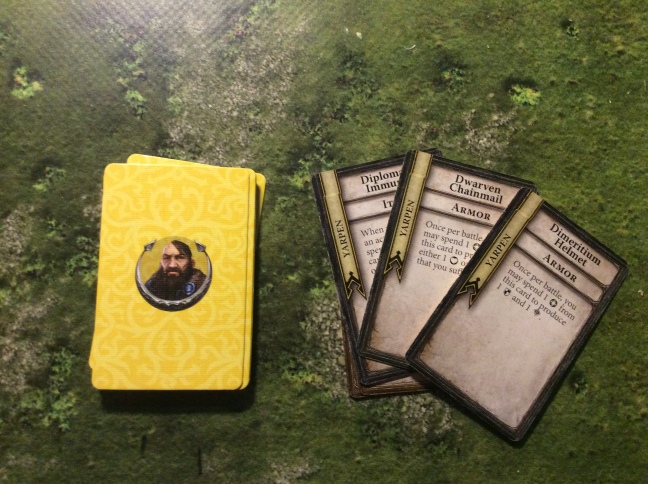 to individual special actions. Two action points are available each turn and may be used as the player sees fit. Once these preliminaries are out of the way, the business end of the game kicks in, in the form of Obstacle Encounters, be they nasty beasties or Foul fate encounters…either way nothing good usually comes from such events. 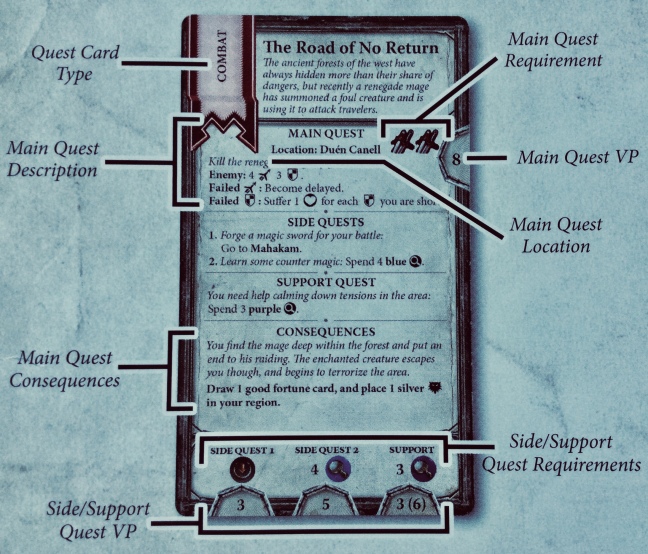 Quest cards (available in various area specialisms-Diplomacy, Magic and Combat) drive the heroes direction of play as they stipulate what needs doing and where it needs to be done. Sub tasks/quests result in the earning of victory points, whilst the final quest completion results in a shed-load of victory points, often a nice reward and, if a little unlucky, a further unpleasant encounter.

The compulsory chucking of dice features heavily in this game from attempting skill tests to all out combat. Various skill or ability cards can influence this dice fest…and, nicely, each hero has a communal die but also hero specific dice adding to the unique play-ability of each character.

Throughout the game Foul fate tokens and Wound tokens are forced upon us blocking certain actions or resulting in the compulsory purchase of absorbent underwear as Foul fate card upon Foul fate card pummel us into the ground.

If life wasn’t hard enough there is a War Track that shows unrest and turmoil caused by the Nilftgaardians and dictates how the Obstacle Locations are populated.

Now for the solo aspect…genius in its simplicity. Each turn/round the AI counter is advanced 2 points along the score track. The pressure is on then to complete quests as quickly and economically as possible. The race is on to be first past the 30 point finishing post at which point the game ends (or highest score if both pass on the last turn). I modified this a little as I kept loosing miserably…by playing up to 90 points. In this way it was like a best of 3 games (first past the post 1-30, first past the post 31-60 and first past the post 61-90…resulting in the best out of three) but with continual play I could complete more quest and become more deeply engrossed in the theme

As with most Fantasy Flight games this has very high production standards. The illustrations are lavish, the board, cards and tokens are all of a thick, high quality feel and, although several markers are a bit small and fiddle for my fat sausage fingers, there is a lot of components in the box. 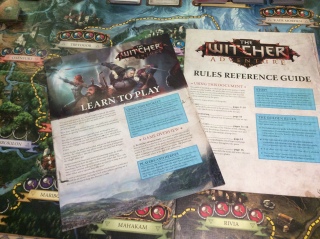 There is a rule book with numerous game-play illustrations and a Rules Reference Guide to expand on terminology used in the rule book.

There are four nicely sculpted miniatures but as this is not a miniatures game and they are purely for place holder purposes, the game could as easily be played without them.

This is by no means a substitute for other live players, introducing devilishly cunning Automa card decks or equally devious Bot Action flowcharts…but I don’t feel the nature of this game calls for such. This simple timer allows a player to delve into this fantasy world, go on an adventure and quest ’till the cows come home.

Fr me, myself and I, this is a light, self indulgent break from reality. A fantasy quest adventure that is challenging , entertaining, great to look at but won’t burn out my brain. a perfect evening relaxer. 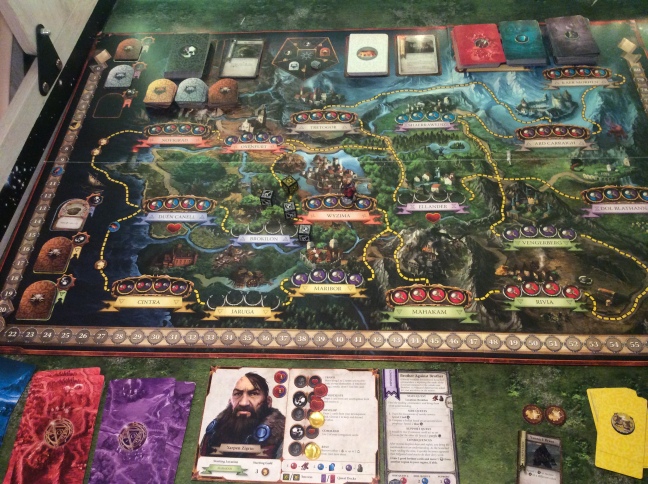 As a multi-player game I assume this is ok. If I were to become involved in multiplayer games, I would like to see much more player interaction. However, as a solo game this, for both Me and I, works brilliantly. Even Myself agrees that the race against the timer is a high tension affair but it allows for an immersion into the world of the Witcher.

So, fully sporting woollen vests and embarking on quests, The Witcher plays a solo Good Fortune card and earns itself a BSoMT 1d8 die roll of (7)

As this continent is torn by strife, I will be about my merry way, hunting monstrous monsters and chin-wagging with locals as I seek those all important leads…but first I must change out of this bloody woollen vest…