An endless black void …seems to be the hole that ever eats away at my bank account.

No One Can Hear You Scream In Space! …But just incase you do feel the urge to scream press play for some deepspace ambience whilst you read.

All alone and adrift in deepest, darkest, deep deep space. Not your normal run-of-the-mill deep space, but proper deep, deep space, desperately trying to explore, expand, exploit and exterminate as many X’s as alienly possible in the Tau Ceti system.

When I first backed this sci-fi title I have to admit to hesitancy as, although I have a love of many things Sciencey and Fictional, I’ve never been much taken with this genre of board game and as far as my experience with 4X goes, it’s limited to crappy Ausie larger brewed in the UK.
…But don’t be put off  my fellow spacial explorer by my brand of Cynical Realism. I was not disappointed by my little interstellar excursion out of  my comfort zone. The look of this game, the artwork and the detailed back stories are something to behold. We have before us an opportunity to voyage among the stars, rub shoulders  with alien races…or at least rub whatever body-parts they have employed biologically to stand in as shoulders, and have opportunity to split infinitives with more vigour than any group of men in tight fitting Lycra shirts ever could.

Immersion or Subversion?
Immersive or what? There is a distinct artistic conformity to this game further supported by a detailed backstory to all the protagonists.

The game mechanic drives the theme rather than a dodgy ‘spaceship & aliens’ veneer pasted over a mundane game play. Space is deep, it is so endless.

Mechanical Attributes:
There is just so much going on here. Political intrigue, star-system economics, exploration, fisticuffs with opponents, alienation, and that’s before the box lid is off and the board is even set up. This universe is ever expanding (which is good for replay-ability as no game will be laid out in quite the same fashion…and rightly so as fashion is ever changing, even in the Tau Ceti system), each race feels and plays differ…

…the enlightenment phase chucks a shed load of cosmic disasters into the mix…you can profit by this or be destroyed…that may, or may not be the line.
In fairness this is first and foremost a multi-player venture, but the way the solo game has been melded in, works a treat. There is a logic tree dictating the AI actions which is heavily influenced by your actions (the cunning little beggars) and each race can think for its self…they do act and feel different from one another making a refreshing opponent with each plunge into deepest of deep spaces.

As we, the budding astro chaps and chapesses, hell-bent on exploration, the individual encounters from one lump of rock to the next, the interplanetary missions, the ability to BUY NEW STUFF to upgrade the space ship, to trade, unique Race traits/abilities just provides a wealth of opportunity. Not only to live long and prosper but to get severely beaten up in the process. 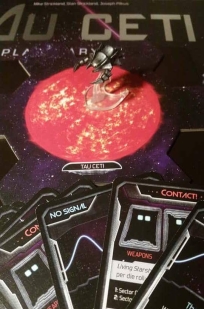 …A living starship! Did I mention the living starship? (I think this was an odd add-on during the Kickstarter campaign) Not only are there the most bizarre collection of boggley-eyed aliens (not wishing to sound too alienist) but there is a Living Starship.A Living Starship. A ship that’s living. This is an independent fly-in-the-interstellar-ointment of the Tau Ceti system that can wreak havoc in both solo or multiplayer games and adds yet another well thought out layer of challenge in an already crammed- full universe.

As spacey type games set in a vacuum go it is visually wondrous. Player boards, Alien Race cards, Tau Ceti Economic Exchange, space tiles all have a uniform identity and when everything is laid out on the table, it does look bloody brilliant? The space tiles are thick and an interesting mix of hex tiles and…

…well, interlocking hexy-stickeyout-agonal sort of shapes. I have a couple of very minor gripes which do not impact on the game at all…the player dashboards & exchange boards are a little thin for my liking and may have benefited from the same treatment as the tiles (but they are robust enough and fit purpose) and the miniatures. Now I have to be careful here as this is not in essence a miniatures game (and the basic game comes with wooden Spaceeples….if that is the term for a spaceship meeple). The ships themselves are not bad and, when painted up, do the job very well…it’s the molding of the orbitals that is a little problematic. They look great but the spine linking each band is very fragile and I had to perform some minor surgery to reassemble several. As I say, this doesn’t affect gameplay and I may be unjustly nit-picky here so I shall rapidly move on. 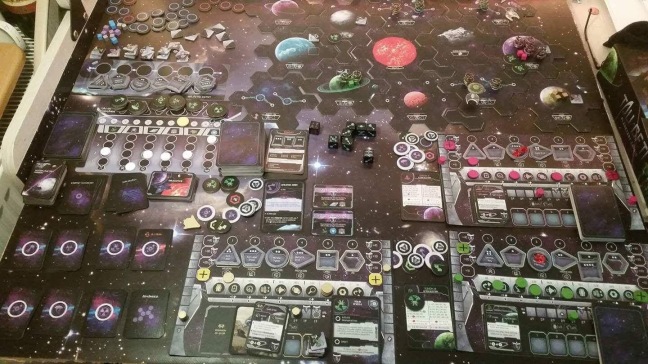 Fundamentally a multi-player game, the chaps at Outer Limit HQ have produced a very strong solo variant which does not feel like your run-of-mill flimsy mechanic, loosely taped over the mutiplayer game….noooo….this feels like a substantial, purpose built jobbie. . There is some minor book-keeping required by a solo player on behalf of the AI player but when I set out on an interstellar journey (usually with two AI’s and the Living Star-ship) it makes for a challenging, entertaining and stellar experience (D’you like what I did there?) To all intents and purpose this plays just as the multi-player game does with the slight exception that the AI doesn’t plan or strategise during the Enlightenment phase. So we, the soloist really are getting something very close to the full game.

To complete the immersion into deepest of deep space I found a couple of pleasant Youtube tracks that players might like to listen to as they read or play…It is not a super-heavy Euro number cruncher, but then again it doen’t need to be. It is light enough to not have one’s brain explode but challenging enough and diverse enough to keep the game fresh upon each return visit. As each of the AI races have a unique logic sequence, the play differently to one another, which adds to the solo experiance.

I have been drawn into the void many times without the aid of a safety net and will again and again.

This has to be a Yay. Not having been much of a space game or 4x game fan…this combination has really been melded together in, what feels to me, to be a unique feel.

If you like space, alien culture and/or 4x-ish games, particularly ones set in an immersive universe that stimulates the mind as well as the orbitals, then this is deffo for you. Just to point out that although there are several forms of combat, this really is background to the all other tactics needed to succeed.

Considering it is a humongous vacuum void, there really is an awful lot of stuff in space!

Well, in the fashion of a small onion….that’s shallot