U Bots and J Bots all dancing in the sun. A solo meandering out in the sand in GMT’s Labyrinthe The Awakening

Initial ramblings:
…I have to admit I don’t think it was the most informed decision of mine to go backpacking alone through the Middle East. Life became rather perilous crossing Syria, Pakistan and Afghanistan… 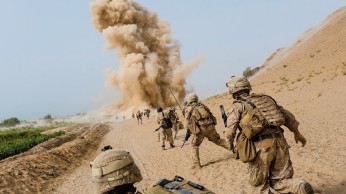 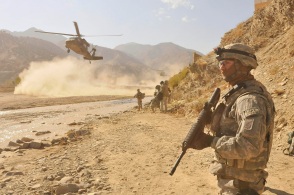 …who’d have thought there were artificial intelligence out there, devoted to corruption and deception. Jihadis activist groups forcing unpleasant Major Jihad actions upon unsuspecting nations throughout the world. Time to stand up and fight the war on terror…or in my case sit back and fight it from the comfort of my hand-me-down, second hand wheely office chair.

This segment really has been covered in #5…of sand-dune dreams and Jihadist Regimes…but to fill you in. We have to take on the mantle of US superheroes and save the world from terror or conversely don extensive stereotype rugged false beards and turn the world to Islamic rule. Either way this is a very tactical area dominance/control and, to a degree, worker placement. 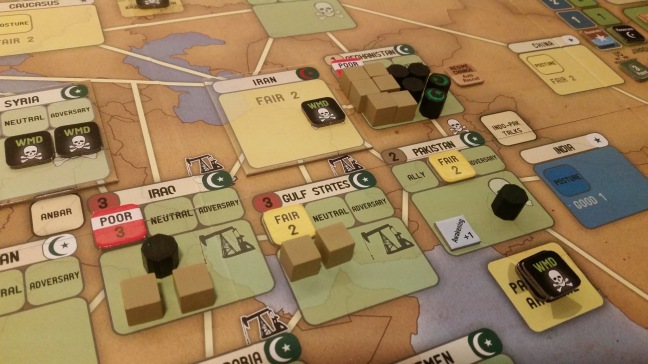 (in that having a presence in a country hinders opponent activity or allows you to perform certain operations that, without your wooden blocks being present, would otherwise be achievable). Although a war on terror has been declared, this is not a war-game in the traditional sense. In fact direct conflict really doesn’t feature here. This is a political world arena with much underhand plotting, unification of world position for and against terror.

It is artificial. It is intelligent and obviously doesn’t suffer from sand ingress as much as I do. The backbone…no, the core processor of this artificial brain is the Awakening Bot. Adam Zahm, the Bot’s developer has produced a fine solution to that age old problem of replicating human opponents. 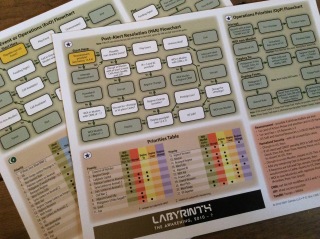 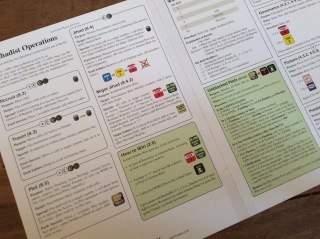 A flowchart that makes IA decisions right from the first card draw and if an event cannot be played or is unplayable/benefits the AI, an intelligent yes/no sequence follows, leading us to a final and all ending action to be taken by the AI. All manner of devious tactics from disrupting our efforts, carrying out minor Jihaads, plotting, country regime change, recruiting, moving about the globe and so on. (The J Bot’s best pal, the U Bot is equally cunning, sherpening its teeth on a tungston angle grinder) A second flowchart fine tunes decision making, especially when looking to place new cubes for, or move elements on behalf of the AI, from one country to another…and if there is still AI indecision (a very human player characteristic so small tip of the hat in acknowledment to the Bot creators for that piece of realism)  there is a priorities table to act as that all important symbolic coin toss decider. It blows my mind how effective the Bots actually work in this game… 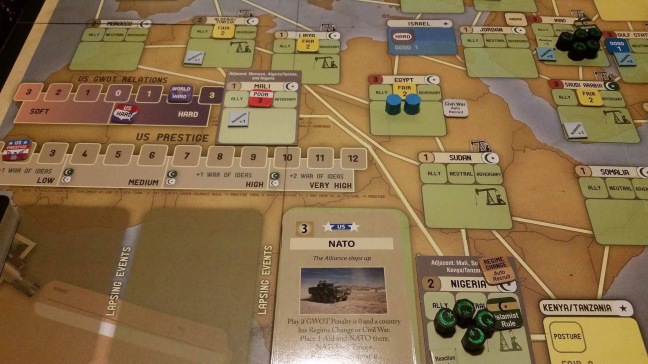 …now you must understand I have never played against a real opponent in Labyrinth and can only make an educated guess about this, but this Bot system feels like I’m playing a real opponent (albeit a not-so-chatty one) who really challenges me so I am happy to play and play again.

Ahead of us there lies a gargantuan task for us to achieve in this little GMT offering. Certainly from the player’s perspective we find ourselves trying to maintain global stability which is no mean feat. Volko Ruhnk’s original design with Trevor Bender’s expansion come together to wallop a spectacularly large load of gaming entertainment onto the game table. The leags of which are positively creaking under thenweight (the legs of the table, that is. Not the game’s legs) This game really does deliver on theme, gameplay mechanics and quality components. The flow charts/logic diagrams…call them what you will…I was tempted to call mine Bernard…but remembered my irritation at the American pronunciation of Bernard so renamed it Kieth the Jehadbot. 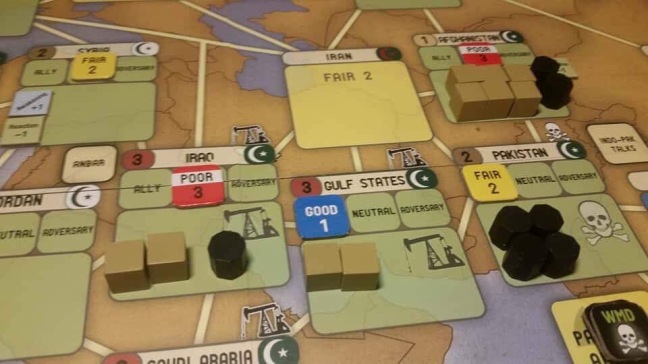 I suppose I should take a moment to sum up what has been achieved by GMT with this little Bot (which is so much more than a Wotnot) and how it helps or hinders the game for a solo player. This is a very “thinky” game in that both sides have few resources but have such gargantuan tasks to achieve with said resources.  So many decisions are based on a forever changing world map. It is not a simple Automa deck that can assimilate the actions of a truly analytical live player. Reacting to a players game choices is an incredibly difficult element of game play even for a human let alone for a Bot opponent to simulate through an artificial intelligence mechanic. The series of Bot flowcharts present a sensible and logical way forward. They address the needs of the AI player, allowing reaction/action to follow/be influenced by changing situations across the board. During my games it really did feel like the Bot reacted well to my game-plan…perhaps a little too well… and, although it is possible for one to predict some of the Bot’s potential game choices, many can be just as easily unforeseen…or worse still, as there are so few resources/options left open to the live player, it is easy to find yourself staring down the barrel of inevitability as you watch, helpless, as events detrimental to your strategy, unfold in front of you. For all of its greatness, the Bot flow charts do require the live player to assess the current board situation but by merely following a very cleaver series of yes/no questions no real decision making is necessary to betaken by the player on behalf of the Bot. It is surprising just how cunningly intuitive the Bot’s gameplay becomes… 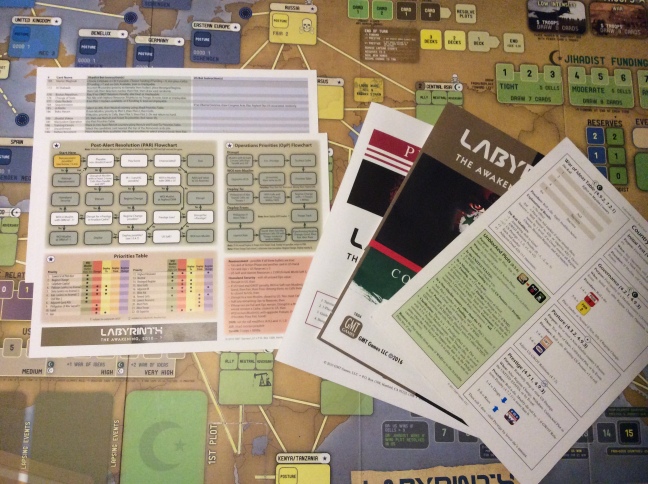 I must point out that it does take some getting used to. Some serious getting used to…Some shortened sentences/statements can leave the player confused and befuddled. I regularly found myself having to refer back to the rule book for clarification but if you percivere, things do eventually start to make sense and the AI opponent can provide a rewarding experience…although not the most adept at conversation.

Little more need be said at this point. Actually that is not strictly true…a portion slightly bigger than ‘little more’ needs to be saud. Normally as a head to head two player game, this has successfully, in my opinion, been made accessible to the soloist and a game that really is worth the investment…although I would have to say at this juncture that I feel the base game without The Awakening may not be quite as enjoyable. It is down to all those little extra components, tweaks to the rules and new Bot flow charts that transforms a very successful game into a spectacular game. 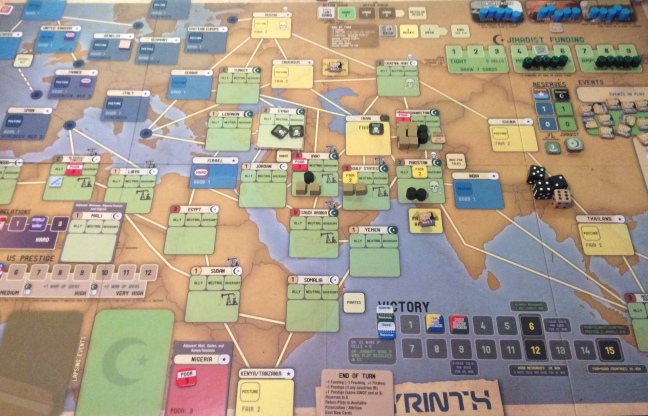 …because it really does make a head to head so accessible to we, the soloist, it really, very nearly scored a top roll but as I found myself expending a lengthy period of time trying to cross reference the Bot flow chart to ensure I was acting to the bots best interest (not cheating by wrongly interpreting the instructions) I felt it necessary to reflect this. The system id great but new players need to be aware that there is a steep learning curve 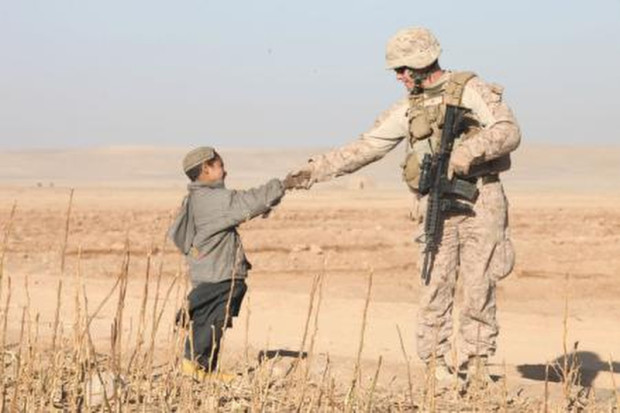 Something for the Weekend Sir?!

#5…of sand-dune dreams and Jihadist Regimesm