…of Critterly Bites and Dark Dungeon Frights (Beyond the Rift)

Mad monks and bonkers Cultist I can cope with. I’ve rubbed shoulders with a few cultists when popping back to the Lovecraftian US in 1920’s and I’m even OK with the idea of the sleeping malevolent evil they try to awake. But what on Earth…or to be more accurate…deep inside the Earth is this lot of blowpipe wielding nutters on?

(Press play for a tomblike ambience to accompany your read)

Some years ago I was confronted at the UKGE by a giant of a viking looking chap who dragged me over to look at his new game. It was on that fateful day I was plunged into the deeply immersive world of the Abyssal Rift in the form of Perdition’s Mouth. A giant, epic of a dark fantasy dungeon exploration style game. I have been a huge fan since.

“Now where is the fuss here”, I hear you cry. “An expansion?”

No. A brand new sequel in card format

“A watered down card game…phaaaa”

No. Quite the contrary. This is the same dark world as perdition’s Mouth. The same heroes. The same aesthetic…and many similar mechanics, but in a multiple card deck format. This is far smaller in complexity, but by no means is it watered down

There is no doubt that we now see a distinct style and feel to the Perdition’s Mouth “brand”. This is a deeply immersive world bestrewn with dander, wonder and more despicable insectoid beings than you can shake a pointy stick at. This latest rendition, the card based sequel to the original game, has just as much immersion as the miniature based game but with much less…hmmm… management. Perdition’s Mouth was a huge game to physically manage. Here we delve just as deeply but fare more economically from a component perspective. There is not quite the same exploratory movement around expansive gameboards, but this same element is subtly implied through new game mechanics, which ultimately, results in the same engaging gameplay.

In essence this new rendition works in a similar way to its predecessor in that our heroes have a the same manner of skills, abilities and available actions. Where this game differs is within the way these are displayed and managed. We have a similar character dashboard, but now our actions and most abilities are governed by the selection of cards drawn from a personalised deck of action cards. The ability to defend, attack, form combinations, assist fellow adventurers are all from within this deck and how we use them is key to our success. The decks are large and varied *each hero possessing unique attributes). We have limited action points which may be spent to deploy action cards taken from our hand. A nice feature is that economic use of these action cards can boost the pool of action points available in a subsequent turn, which forces us to thoroughly evaluate each situation with great care… and under extreme pressure, too.

Although range/distance is a simplified concept in the play area (two areas for the encountered foes- close or ranged), the notion of both our heroes and the enemy moving to engage or disengage has simple, yet effective mechanics employed to replicate this, and all without the need to move figures or cards about a play area. Similarly there is a deck of cards (different for each scenario) that represent obstacles or objectives for us to negotiate… and it is in this manner that we can still thematically move through the environment, climb over rubble, open doors, traverse empty halls, negotiate fire and so on.

We can still gain wounds that stay with us cluttering up our hand that reduce the availability of action cards (not unlike the original game) but we also gain fatigue and other ailments, all of which build a rich layer of reality and believe-ability. 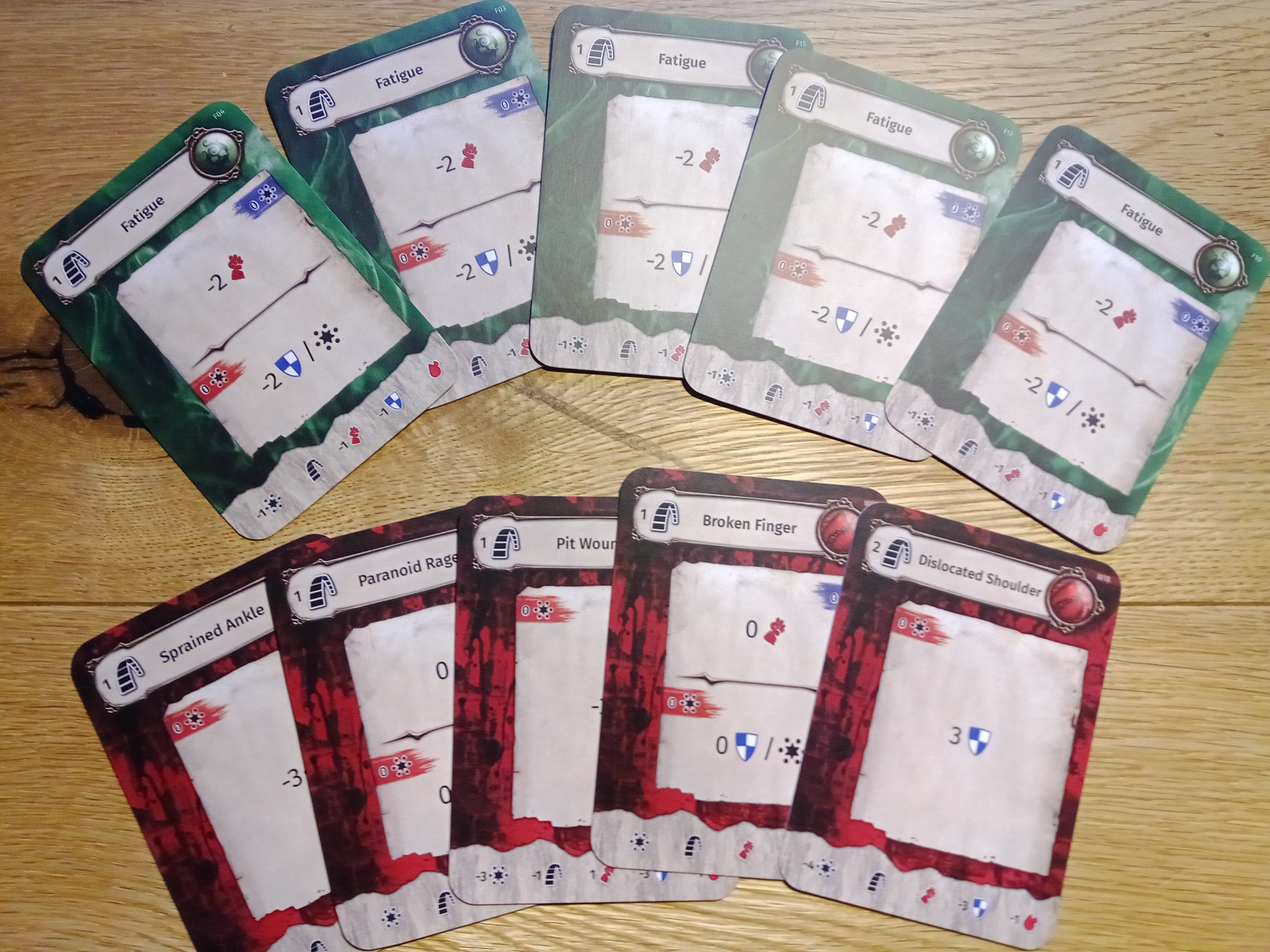 As the game is fully cooperative. In other words us, the heroes, are pitting our wit and intelligence against the game. There is a table controlling the deployment of newly encountered foes, that increases the ever growing threat as our exploration proceeds. A second table (also scenario specific) governs the actions and reactions of all enemies currently in play. This offers us an opponent/enemy that will not be predictable, nor will it be easily vanquished.

As I briefly mentioned above, the game is scenario based. We can dip in for one-off games, but these scenarios work best as, and are designed for, a campaign game, offering us many hours of ever more challenging adventures, each with new goals, objectives and rewards.

I have a prototype copy of the game but even so, the components are already looking great and, based on passed experience of Dragon Dawn games such as Dwarf, Perdition’s Mouth, Black Hat and Darwinning, the production copy will be excellent. The components are largely language free, relying on iconography to detail many card effects and abilities, which makes life easier. But where certain special abilities are involved, there is a small amount of clear instruction/detailed text. What is nice is they over all feel and iconography have been retained on all components, giving this a cohesive feel as a part of the Perdition’s Mouth family.

As a cooperative game for one or more players, this is designed for multiple players to engage in dialogue, discussing tactics and gameplay. That having been said, not all cooperative games work well with a solo player operating multiple characters. One could surmise that this be the case here, too. Well, it’s definitely not true. The game scales in difficulty from one to multiuple heroes, so we, the soloist, can take a solitary hero into the dark depths of adventure or manage multiple heroes. The game scales the difficulty challenge very well as the hero/player count rises. Most of my games (and there have been quite a few) have been with just two heroes but I get a sense that this game is will be just as thrilling for a soloist with one or 3+ heroes under their command

I have already touched upon this element earlier. Several very easy to use charts, in conjunction with the small number deck, provide all that is needed to dictate how enemies are to deploy and how they will act/react to our heroes. This changes for each scenario, which means that we will never have a new scenario that feels just like the previous. Each game will feel fresh and incredibly challenging.

For a very simple game, it really does offer us a challenging solo experience. I have to admit I have made many an unwise choice during my numerous plays. I guess I should say it is fun, but as it is so tense and demanding, I have been too preoccupied with balancing my cards/resources to know if it was fun or not…. Ultimately it is most enjoyable, however. I like how every turn requires careful consideration, balancing action points with hand management… choices are incredibly difficult when trying to maintain that fin balance for survival. Do we go all out and still risk failure, do we assist each other, do we play defensively… I really felt like I was still in the “chew us up and spit us back out” world of Perdition’s Mouth. 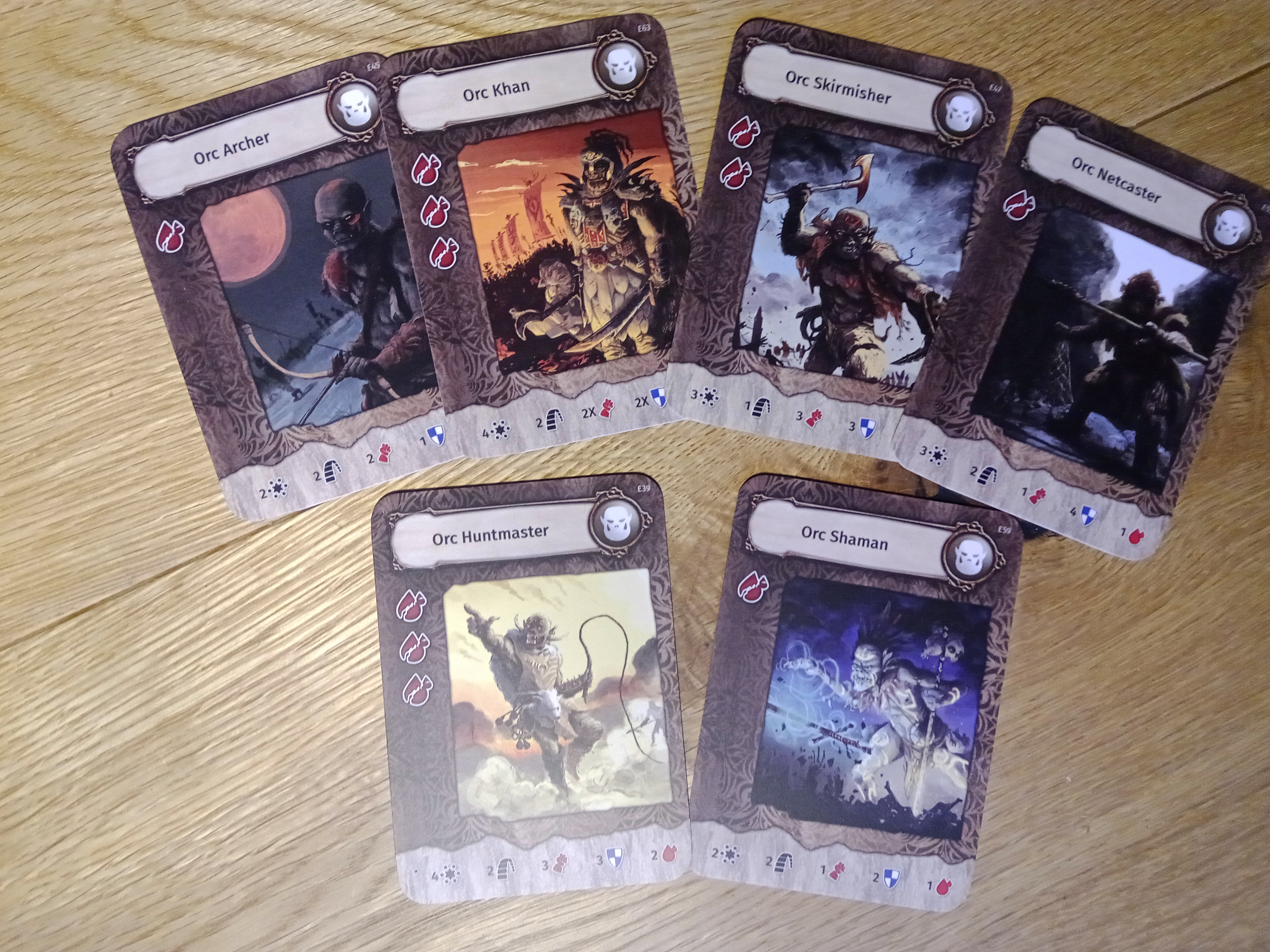 There is a high replayability, as each game has an element of “luck of the draw” when considering what order foes materialise and what action cards we draw. Added to this mix come the tables that govern the enemy deployment and activity… each scenario offering different adversaries, objectives and ways in which the enemy can wollop us.

One small touch that I particularly like is the use of multiple iconography areas on cards that can cause harm to enemies. A row of icons at the foot of such cards, when slid under an enemy card after damage has been caused, alter the characteristics of said enemy. Their health may be reduced, their range affected, their ferocity diminished… it adds an extra level of depth that requires no book keeping

Whether a player is familiar with Perdition’s Mouth, likes dark fantasy or simply wants a short solo challenge in a lengthy campaign format, this is definitely an accessible and enjoyable game experience worth checking out as it still has a few days left on Kickstarter. Beyond The Rift has assaulted, battered and bruised the BsoMT 1d8 die with its 7 face upwards

Now you have distracted me and a bloody bone-worm thing has slithered up on me and is gnawing away at my booted foot. …oh, blast! All I have action points for is to rest and defend… chomp away my disgusting little friend…next turn I can do some serious Bashing, and then we’re looking at some serious insect swatting… you little, toothy git!

Something for the weekend, Sir?