…of Stews and Brews (Chai)

Pour water just off the boil over the tea..don’t scorched the leaves as that will ruin the flavour. Allow to infuse and pour from the decorative china tea pot into a porcelain cup and saucer.

What a load of old tosh…bung a bag in a chipped mug, whack on a load of boiling water, wring the bag out and ruin with several spoons of sugar and a slug of milk…builder’s tea…thick, hot, brown…just as nature intended.

(Press play for a teashop ambience to accompany your read!)

And as I’m from a nation of tea drinkers, a game about the very same… I don’t mind if I do…

Chai is a game from Deep Aqua Games that I have been fortunate enough to have been allowed to join the test-play group. It is a game of tea. Not slurping great cups of luke warm brown enamel stripping liquid, but the making of a special blend for the discerning drinker. 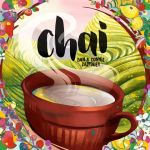 In Chai, we will step into the shoes of a tea merchant, combining tea flavours to make a perfect blend. Specializing in either rooibos, green, oolong, black or white tea, you will buy and collect ingredients to fulfill our customers’ orders.

To be the best tea merchant at the end of the day, you are striving to have the most victory points from completed tea customer cards. Additional points are given from awards and remaining money.

As a tea merchant you will:

Without out even considering artwork, the way in which this game works and plays lends itself to the small teashop entrepreneur. In a competitive market we have to compile a range of flavours and additives, as well as attend to our own tea in order to fulfil orders. It is, albeit light in nature, a commerce game not a cafe sim tea serving game. It is an interesting take on this genre and has a deeper gameplay than first appearances may suggest. This is obviously not a heavy euro, worker placement, resource management affair but, as a family friendly/accessible game, is one that opens itself up to players of all gaming experience. It becomes an engaging experience and we tea addicts can very quickly become immersed in the cut and thrust of the open market, be subject to the fickle and demanding nature of customers and get our potential customers damned right stolen from outside our very own window!

There are going to be similarities to other games when we consider this genre of game but there are several nice touches introduced to make market place buying a little different to auctions or bidding or…well, other examples escape me for the minute. Maybe I require a cuppa to calm nerves. 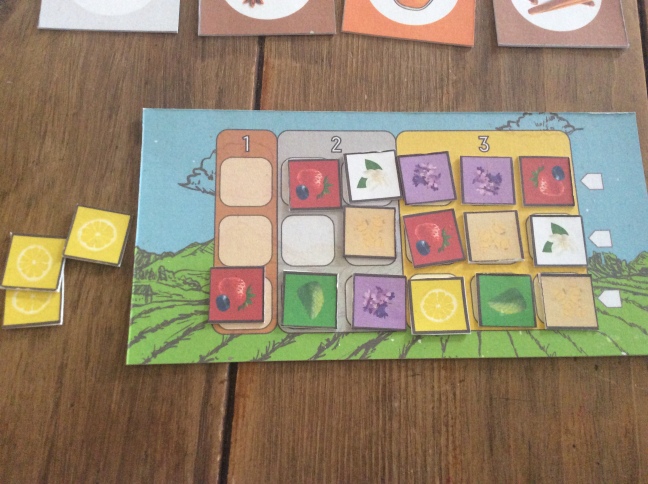 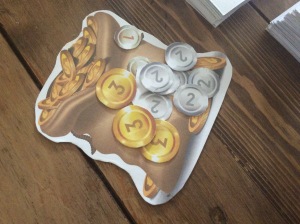 The flavours board is a grid of six columns (subdivided into a single column, a double and a triple) by three rows. The intersections of rows and columns provide the location for the randomly drawn flavours of berries, mint , lemon and so on and so forth. When we trundle off down to the market to buy or flavours, it is imagined we are selling our tea product as well. This gives us an instant three coins of which one must be spent on flavours. What is rather nice about buying flavours at this juncture is we only pay the amount shown at the top of the column from which we selected a  flavour…nothing staggering in the way of groundbreaking rules yet…I know…but if, for the sake of argument sake, I want a lemon flavour from column one (it should cost me 1 coin) but if there is an orthogonal flavour of the same type vertically, I get to take that for free whether I want it or not. Now imagine there is also a lemon flavour in column two next to the one I chose. I have to take all three but now have to pay two coins as I am forced to pay the value of the right most column my flavour group comes from. (The photo above shows where I selected flavours from) This is a double-edged sword in many respects as it means that we can cheaply double or triple our flavour quantities for very little out lay, but if we are reaching the limit of flavour that can be stored in our play area, we are forced to take more than we need and flavours will have to be discarded. It means that some times we want a flavour in column one but are forced to pay a high price as a result of neighbouring flavours in the adjacent column.

A similar situation occurs with the additives offer in that although we don’t pay a cost, we have to take all like additives in one go. 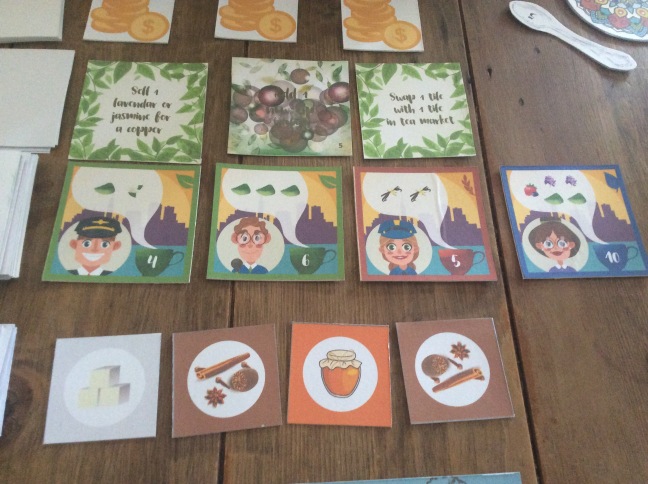 We spend much of our time building up flavours and additives but there are customers to also consider. They are lining up around the street corner. We can acquire customers to add to our play area (preventing our opponents getting to serve them their inferior brew) in readiness for our prepared cuppa.

This allows us to plan and strategise but can also be a way of pre-empting a possible big score from our opponents. We have six personal coloured tea tokens each and a potential of eight customers. A token must be used each time an order is fulfilled so late game scoring will prove to be a more competitive affaire. Why d’you ask? Well, if I wish to fulfil a red customer and I am playing green I must pay my opponent a coin to make a compulsory purchase of one of their tea tokens…as you can see, we can fulfil our own or our opponent’s preferred customers. Varying victory point from low 4’s or 5’s up to giant 15’s mean that it can become rather competitive reserving customers that will bring in the big scores.

There are awards at the end of a game as well, given for diversity of customer etc which can add an extra layer to our strategy og picking customers. 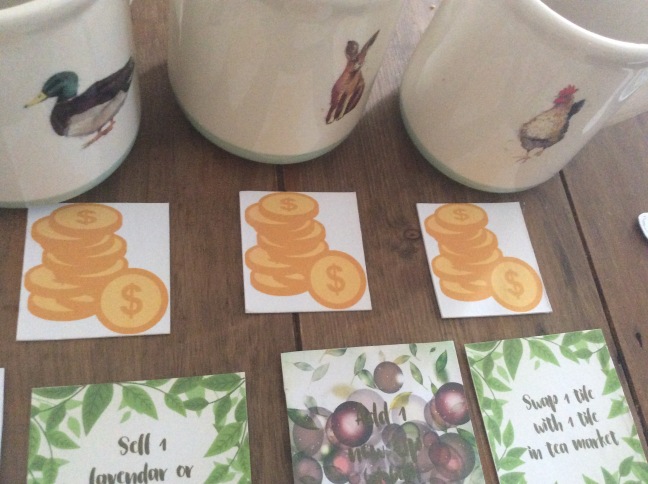 Ohhh! I mustn’t forget about the tips. On Fulfilment of an order we tip our flavours and additives into a mug. In front of each is a randomly selected tip from 0 coins to 3 coins. Small change to some but it all adds up in the end.

My photographs show the selection components as of playtesting. There are numerous placeholder images which I assume will be replaced in the fullness of time by images specifically for Chai. I imagine the component count will remain similar but tuning in to the project development will enlighten those wishing to find out more. I shall endevour to post updated photos of the game’s actual artwork when it becomes available.

Now, as it currently stands this is only a multiplayer game…and one that probably feels a better fit for 3+ players, but I know that Dan and Connie are looking at ways to offer the soloists amongst us a competitive AI character/s with the intention of each coloured AI having its own special traits. With this in mind they should each play in a different way to each other. If this proves to be successful, I imagine playing solo against at least two AI players both playing their own unique strategy. This has some great promise for me and I am eager to see how the solo variation develops. 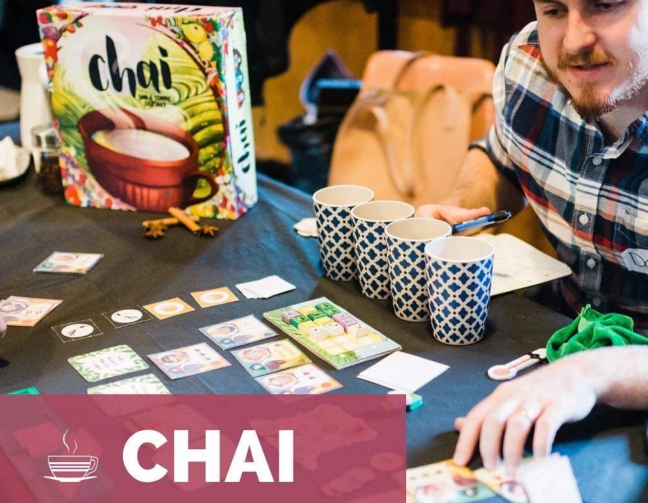 This is a mild departure from the bulk of games I play and it is rather refreshing (no real tea pun intended) to stumble across a title such as this. I have enjoyed the ease with which my daughters and I have accessed the game the nice, its simple but good humoured, competitive nature. As I touched upon earlier, this is not a heavy cutthroat game but a more sedate commerce experience. That said, it is fun and thoroughly engaging despite its lightness. There are decisions to make as this is no slouch in the ‘use of the old grey matter’ stakes. There are opportunities to take and teapots to stew.

Some may see this as a ‘filler’ game and admittedly it is short, it would nicely fill the gap between overweight podgey Euro games, but I always feel that title to be a little demeaning…condescending…offensive to smaller titles. This has more substance to it than a mere throwaway/infil game, able to stand on its own leags as a short main feature…

My playtesting was conducted under the strict supervision from No.1 daughter (19) and No.2 daughter (14) in both two and three player games. Both player counts proved to be fun but I think that the competition created with 3+ players is, perhaps the more thrilling. That said, two player is just fine but imagine how competitive it would be for two players if an AI player or two could be thrown into the mix.   If the solo AI opponents can be figured out by Dan and Connie, then introduced at some point down the line of the game’s development, this could open the game up to an even wider market audience as it will offer an opportunity for soloists to dabble in tea making too.

As it stands it would be unfair to roll the tea stained BSoMT 1d8 die as this is currently a multiplayer game…but I think that when the AI players come online, this will become a great contender for shelf space of all soloists out there. It offers an engaging, fun game without complexity but with depth to entertain.

I would recommend anyone interested in tea, gaming or life in general check out the Chai kickstarter page when it goes live. There is already a growing Chai community on facebook (link below)

Bloody ‘ell, I am absolutely parched. All this waffling on has made me reet thirsty (said in my bestist Yorkshire accent)

Time to bung tut kettle on then an’ ‘ave a brew…

…oooh, and a couple of chocolate digestives…or a Hobnob or two…

How To Play by Meeple University