…of Viking’s Doom and a 12th Century Tomb (Maeshowe)

Our Viking boating tour of the Scottish islands looks to have it a slight speed-bump. Whilst taking in the sights of the archipelago off the northeastern coast of Scotland (Neolithic sites, tall sandstone cliffs, seal colonies, Skara Brae, a preserved village with a reconstructed house, and Maeshowe, a chambered burial tomb incorporating 12th-century Viking carvings)…the Orkney Islands proved to be one site too many for us as our party has now become lost deep within the tomb of Maeshawe.

Something new for one to two cooperative players is due to emerge from the Dragon Dawn camp and hit Kickstarter in 2021. A game of desperation and madness for Viking survivors trapped on the island of Orkney, within the tomb of Maeshawe in the 12 century.

It is of great interest to delve into a piece of British history not often referred to, especially in game terms. This game has a distinct dark and foreboding feel to it as we attempt to escape the enclosed tomb. In essence this is an abstracted game, drawing upon simple hand management and limited resource management. However, that said, there is still a strong feeling of adventure and narrative as we attempt to dig our way through the collapsed tunnels and, with the gods on our side, feel the fresh breeze once more upon our faces.

The basic play is actually incredibly simple; play a card from our hand and discard a second card. But do not be fooled by its lack of complexity. The way in which the cards have been designed thrusts forward so many very difficult decisions with every turn. Each card has an immediate effect, whether played or discarded, some for the good of our party and some forcing terrible effects upon us, to our detriment. We use two cards each turn, draw two cards each turn and so, always have a hand of five cards to chose from. That said, we are not always guaranteed possession of cards that can be used to our benefit. Herein lies the agony of choice. Which cards do we play, which cards do we discard? Survival is obviously key, with the requirement of food to boost health and abilities to dig our way out. We lay cards in front of us (which in an abstract way tells of our journey/adventure), sometimes to our advantage when multiple cards of a similar type lie in sequence, but at times it is unavoidable to lay a card to boost health or damage us….

And in doing so, we can inadvertently undo all of our progress. The unstable rock is bound to collapse at some point. Being trapped in the dark can also drive us to madness, which usually leads to negative consequences, but can be used to our advantage from a strategic gameplay perspective

I have a prototype but even so, the components are already looking great and, based on passed experience of Dragon Dawn games such as Dwarf (also from the creative mind of designer Lee Broderick) the production copy will be excellent. The components are language free, relying on iconography to detail card effects and abilities, which makes life easier.

As a cooperative game for one or two players, this was purposefully designed to cater for the soloists amongst us. I have not tried the 2 player version, but as a solo game there is up to 30 minutes of high tension and intense thinking.

There are no bots nor any wotnots as the design pits us, the live player, against the challenges thrown at us by the game itself. This is a game of our own survival, and our wits are indeed tested to the full.

For a very simple game, it really does offer us a challenging solo experience. I have to admit I have made many an unwise choice during my numerous plays. I guess I should say it is fun, but as it is so tense and demanding, I have been too preoccupied with balancing my cards/resources to know if it was fun or not…. It is most enjoyable, however. Keeping health up at the expense of tunneling, trying to avoid temptations such as golden artifacts… choices are incredibly difficult when trying to maintain that fin balance for survival

There is a high replayability as each game is reveals different card combinations. Added to this mix come three 3 card expansions that alter the game/change the challenges thrown at us and a selection of variable setup rules add to the variability. I have not tried it, but like the idea of the Fear of the Dark coop variant that emulates the dark confinement of a tomb by preventing any form of gameplay discussion.

Whether a player has an interest in history or simply wants a short solo challenge, this is definitely an accessible and enjoyable game experience worth checking out when it comes to Kickstarter. Maeshowe has trapped and encased in stone the BSoMT 1d8 die with its 7 face upwards 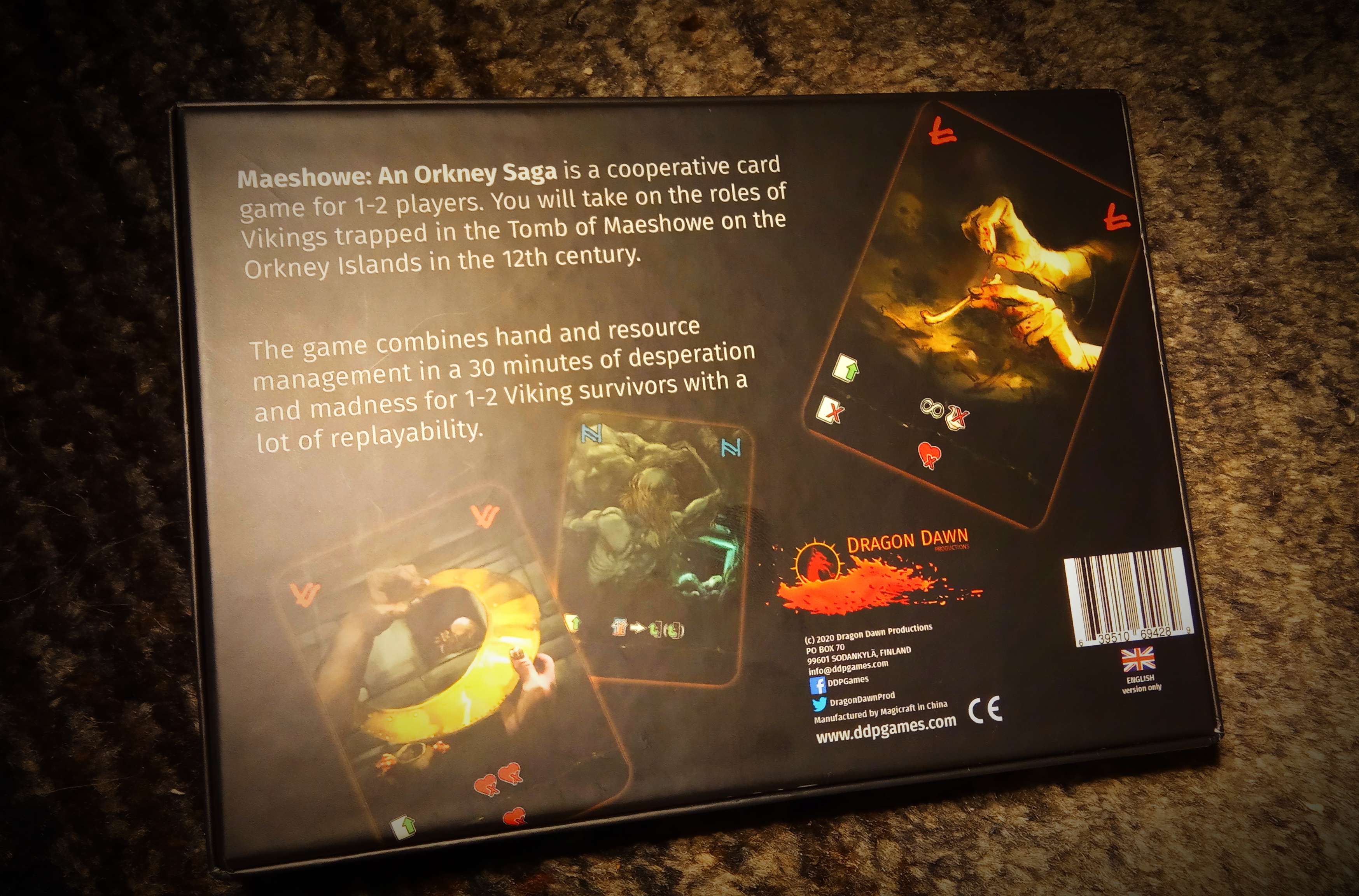 Now, do I spend some time digging out that shiny golden artifact, twinkling in the rubble over there (risking precious time and energy) or shall I just dig for glory?… by that I mean the exit. Hmmmm. Now where did I put that makeshift shovel, cunningly crafted from my Viking-like codpiece?